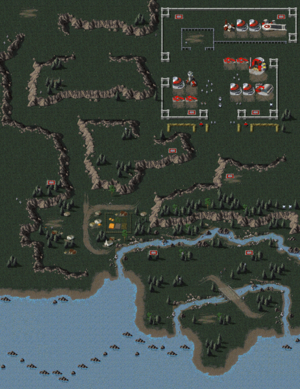 Map of the Ostrava base

This is a commando mission. You get one powerful infantry unit (plus a transport helicopter). That's it! Obviously, you will be using covert tactics here.

The commando arrives in the south-east corner of the map, with one enemy in range. Attack the enemy, cross the bridge, and snipe the two enemies on the other side of the bridge. Three other solders are hiding behind trees. Destroy the SAM sites, and you will get a transport chopper to lift you across the river.

On the other side, move the commando to reveal the junciton and wait for the buggy to pass by. You can proceed either north or east.

If choosing the north path, take a left at the second junction, and follow the ground until you reach the base's entrance, with one rifle infantry patrolling back and forth. You can slip past him, but sniping him will cause three flame troopers to see what happened. Once inside the base, save the game (in case you want to destroy another building), and destroy the one that causes the most problems.

If choosing the east path, you will have to move past the base without engaging the turrets. Once you reach the side of the base, two light tanks will become interested and attack the commando. Turning north brings you to the alternate base entrance.