This page needs to be wikified It needs to be re-written with wikimarkup and laid out correctly according to the editing guidelines. If you can wikify this page, please edit it, or help by discussing possible changes on the talk page.

If you need help with wiki markup, see the wiki markup page. If you want to try out wikimarkup without damaging a page, why not use the sandbox?
Wikification required: formatting

This page needs to be wikified It needs to be re-written with wikimarkup and laid out correctly according to the editing guidelines. If you can wikify this page, please edit it, or help by discussing possible changes on the talk page.

If you need help with wiki markup, see the wiki markup page. If you want to try out wikimarkup without damaging a page, why not use the sandbox?
Wikification required: formatting

Nod units are listed here. Nod is hit and run so they are weak armoured but religious.

Same as GDI. Good in number, bad against any heavy units. Very vulnerable to units with a better range than it. Cheap.

This infantry tackles enemy tanks and aircraft. They hate Grenadiers and are fragile.

Rocket infantry soldiers (sometimes called Rocket soldiers) were specially trained soldiers that were equipped with missile launchers (usually Dragon TOWs or Redeyes) and tasked with attacking enemy armor, structures and aircraft. They were first introduced into combat by the Allied Forces and later, in one form or another, served in every conflict to date.

The trooper in the Great World War II and later the First Tiberium War, was equipped with a powerful missile launcher outfitted with heat-seeking missiles. The launcher itself changed little over the years, only having its guidance systems upgraded. After the spectacular loss of the Soviet Union in no small part due to the might of rocket infantry, GDI has introduced their own squads alongside the grenadiers against Nod.

Following the war, GDI recalled existing weapons and reassigned the soldiers, while the Brotherhood of Nod refined the weapon, which now was a specially designed arm-mounted weapon interfaced with the advanced Nod armour's helmet visor, allowing for a much more precise method for launching projectiles.

In the Third Tiberium War, GDI reintroduced rocket infantry in the form of missile squads and Nod decided to rely on militant rocket squads.

This guy cooks enemy infantry and enemy structures for lunch with its flamethrower but it hates tanks and anti infantry units.

Infantrymen armed with flamethrowers were used both by the USSR in the Great World War II, and the Brotherhood of Nod in the First Tiberium War. Even though they still used the same concept of the weapon, the implementation changed a lot. The model used by the Soviets launched a fireball that ignored infantry between the flamethrower operator and the target, utilizing rechargeable high pressure gas chambers to actually launch a blast of flame. The model used by the Brotherhood of Nod fired a liquid spray that burnt infantry in front of them. This model was also specifically designed to burn slower than normal flames. Eventually, Nod forces came to a conclusion that this added spray chamber system was too unreliable and complicated, and instead used a regular spray type flamethrower, albeit with a wide angle nozzle.

Both the Brotherhood of Nod and the Soviet army had different tactics when it comes to flamethrowers. Soviet flamethrower infantry needed to be split up, because if the unit was killed, there was a high probability that the tank full of flammable chemicals would be set on fire, damaging nearby infantry. Thus, Soviet commanders often placed them behind the front-line infantry, but also spread apart, which was at times difficult because of the weapon's short, but non-zero range. For the Brotherhood of Nod, it was even more important that Flamethrowers be split apart - because they could not launch a fireball, any infantry nearby would take flame damage - even friendly units.

As with other infantry, flamethrowers were vulnerable to anti-infantry weaponry such as mines, explosives, machine gun fire, napalm, and nuclear explosives. However, the short range of the flamethrower meant that they would be exposed to this fire while attempting to reach a target.

Always send tanks after them or flank them with infantry.

This unit is Tiberium impervious.

This unit can shoot up infantry and blow up structures within seconds.

Keep it away from any Light Vehicle like the Nod Buggy or a Humvee. 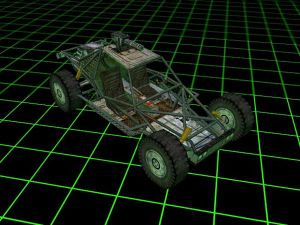 This buggy is weaker than the Humvee but faster.

Nod buggies were light desert patrol vehicles armed with M-60 machine guns fielded by Nod in the First Tiberium War. They had powerful engines, but no armour to speak of. As such they were used primarily as recon vehicles, infantry countermeasures and harassment units, capable of quickly attacking the enemy, dealing a few blows, and retreating before the main force would arrive.

However, they were also cheap, meaning that they could be quickly bought and ferried to Nod bases regardless of the place of conflict and serve as the last line of defense occupying the enemy long enough for the commanders to deploy effective base defenses.

Towards the end of the war, a new version of the buggy was put into production, featuring a completely enclosed two-seat cockpit, better suspension, armor plating and a single turreted .50 machine gun.

This buggy was succeeded by the attack buggy, which was developed based on the advanced version of the First Tiberium War patrol vehicle and the Raider Buggy in the Third War.

These units are fast foes but also weak to tanks. Also Use Orca VTOL Aircraft against them. The Orca can kill them in one attack because of its armour.

The M2 Bradley Light Tank is weaker but faster than the Medium Tank. Good against Guard Towers and light vehicles but Bazooka infantry are a problem to it.

The AH-64 Apache Helicopter is armed with machine guns but in number they can destroy tanks because they are accurate.

Nod cannot build helipads and apaches right away so capturing a GDI conyard is the only way to build them.

During the Great World War II between the Allies and the Soviets, the Allies used the first versions of the M110 howitzer as artillery units. It was essentially a treaded weapons platform with a single 155mm cannon unit, firing ballistic HE rounds. Allied commanders generally used it to weaken Soviet forces and bombard enemy bases. Although it was effective to use against Soviet defenses, Tesla coils had even greater range than M110 artillery pieces, and enough power to melt them to scrap in one blast.

The M110 was generally used as a highly effective and long range way to deal with infantry and soften up enemy formations, although because of its lack of health, slow speed, and very slow turn rate, it was very vulnerable to enemy fire, particularly by tanks. Allied commanders generally used it as a second-line unit designed to support medium tanks and light tanks

During the First Tiberium War, Nod used the M110 artillery alongside the G6 howitzer as a powerful and long range weapon. Due to the GDI's lack of extremely long range defenses, the artillery had longer range than all enemy defenses, including the advanced guard tower, when used properly.

Its ability to damage buildings and infantry was highly appreciated during this period, giving Nod another way to destroy its opponents. After the First Tiberium War, the M110 and G6 were phased out in favor of Advanced Artillery.

This annoying enemy sure is faster than the Nod Buggy but hates powerful enemies.

The Recon bike was a motorcycle with a frontal Plexiglas cockpit. It was equipped as a scout and light-anti armor unit, and was equipped with rocket launchers effective against tanks. However, it suffered from its lack of armor, but partially made up for this through its extreme speed.

They were used as reconnaissance units as well as for patrolling. In a standard battle line, they could strike vulnerable targets while avoiding enemy fire. Also, they were very useful as part of hit-and-fade tactics.

The recon bike was reasonably expensive, costing more than a Humvee or Nod Buggy. However, it was even less well armored than either of the two previous units, which made it extremely fragile. Its speed could be used to evade certain munitions, but the Recon bike was very weak against guided weapons such as Tomahawk cruise missiles and Dragon TOW rockets. Because its weapon was not effective against infantry, this made it highly vulnerable to Rocket Infantry. Also, the long range and terminally guided firepower of the Advanced Guard Tower also made it difficult for Recon bikes to engage these targets.

These bikes are weak armoured so they can be killed by infantry. Also their speed makes them fast to dodge missiles, Tank Cannons and almost everything so use concentrated bullet fire.

This monster is responsible for causing cities to become ruins because its flame weapons burn all infantry and structures down within seconds along with splash damage. Hates tanks again.

The Flame Tank was an experimental multi-purpose weapon developed by the Brotherhood of Nod. The tank was comprised of twin fixed flame cannons joined to two large pressurized napalm tanks on its back. The driver's canopy was located between the giant flamethrowers. The whole vehicle rested on a light tracked chassis. The armour of the vehicle was non-existent, as the weight of the fuel on the tank and the size of the weaponry prohibited all but the minimum protection for the operator.

The resulting tank was a fast, versatile weapon, dangerous to infantry and buildings alike. The vehicles usually projected their napalm weaponry in brief bursts to prevent accidental combustion of the fuel tanks; however, a special model utilized by the Black Hand was more capable of sustained projection (as well as a turret that could move independently of the treads.) Its main weakness was the lack of armor and short ranged weaponry, compensated to a degree when operating in conjunction with other tanks of the Brotherhood.

It hates tanks and other powerful weapons. Attack it with tanks, flank them with infantry or aircraft.

A Very annoying foe because it will become invisible until it attacks with its deadly missiles. Fragile again and fast. Infamous because GDI took collateral damage in the past all because of these troublemaking tanks.

Stealth Tanks are Nod tracked missile carriers that are equipped with a stealth generator. The Brotherhood used stealth tanks throughout all three Tiberium Wars in a variety of capacities, notably surprise attacks, sensitive reconnaissance missions, and as a mobile anti-aircraft defense. Unfortunately, as stealth tanks mount both missile launchers and a stealth generator onto a tank frame, to avoid sacrificing speed or increasing costs beyond any reasonable limit, stealth tanks across all generations are lightly armored. GDI researched the stealth tank properties, as part of project A2411.5. It would appear that these may be based off of the Phase transport, an experimental Allied vehicle that was hijacked by the Soviet super-soldier Volkov and disappeared after the end of the Great World War II.

During the First Tiberium War Nod developed it's first stealth tank prototypes which Kane called "Ezekiel's Wheel". When the tank fired its twin Dragon TOW missiles it would have to briefly deactivate it's camouflage; as the cloaking system was incapable of recalculating the changing characteristics of the launchers during firing.

Do not use infantry that shoot up close because it will crush them. If it crushes infantry it will be detected. It is Weak armoured and it will fire on aircraft so use Medium tanks or Mammoth Tanks in big numbers.