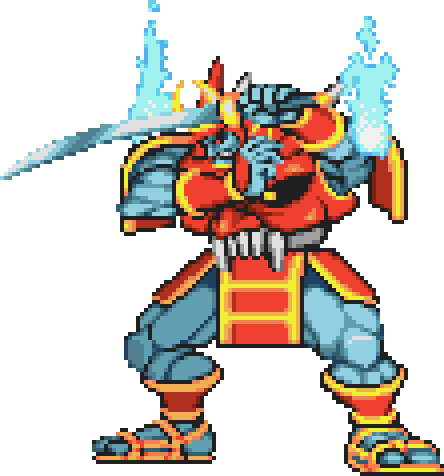 When Bishamon was looking around in an old antique shop, as if drawn by fate, he found a piece of armor and a sword. At this moment, he lost his own thought. When he realized where he was, he was at his house, the armor and sword sitting beside him. When he went back to the store to ask what happened, he found out that he had aggressively forced the owner of the shop to give the armor and sword to him. Bishamon himself had no memory of this. It made no sense to him, but as he stared at the armor, it felt meaningless to him.

At the time, his wife, Orin, worried about Bishamon as he sat in front of the armor for days. She asked him to let go of the armor and sword, but Bishamon heard nothing of it. Two weeks later, he decided to ignore his wife and wear the armor.

The moment he wore the armor, he realized his mistake and with the last of his strength, shouted, "Run... Run, Orin!!"

Bishamon's mind was full of hate and accursed power. He had donned Hannya, the armor of hate and Kien, the blood-sucking sword. He went on countless days of killing as Hannya demanded more sacrifices.

When Bishamon had fought against Pyron, Pyron's energies caused Bishamon to be separated from Hannya's curse. To make up for his sins, he and his wife became priests/monks. The practice he had started was called "Roppoudou". This practice gave its followers a strong mind and would cleanse the mind and spirit of its followers. Traveling throughout Japan brought peace to his heart again.

Several years later, he had stopped by an old temple. There, he found writings about a separate dimension called "Makai". Contained within these writings were drawings depicting the armor, "Hannya", and the sword, "Kien" and other creatures similar to those two in what seemed like hell. Bishamon thought to himself, a careless person like himself may appear again. He thought that he may not be able to make up for his sins, but he may be able to prevent a similar tragedy from happening again. He had already walked the path of darkness; he had nothing to fear.

To make contact with this "Makai", he secluded himself within a deep snowy mountain. He sat down and held the Shakujou and started to meditate. When his spiritual strength had reached its peak, he could see that of a different world with the eyes of his heart. He was determined to seal Hannya away at any cost.

At the same time, Hannya had started to thirst for blood once again. Even without having a master this time, the armor and sword started to move again. They gathered all the spirits around them to create a body and moved out to hunt Darkstalkers and their blood. When Hannya and Kien moved out, they were sucked into the Majigen. But before Hannya could kill, Bishamon had caught up to him and sealed him away. After these events, Bishamon had disappeared and is thought to have led a peaceful life. 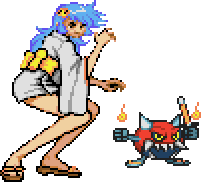 When hit by Anakaris' Pharaoh's Curse, he becomes a small caricature of the possessed armor. When attacked by Demitri's Midnight Bliss, he transforms into a version of Yukikohime, a character from an old children's anime series named Dororon Enma-kun.

Oboro Bishamon is a secret character who first appeared in Vampire Savior. This version of Bishamon is a depiction of what Bishamon would be like if he truly conquered and mastered the evil in the armor that intended to possess him. As a result, Bishamon is in complete control of both himself and the armor, instead of the armor taking control over him. As a result, he loses the ability to send the soul fires out to possess an opponent, but he gains some new abilities. He has slightly different colors and is shown to don and remove the armor at will before and after a fight.

Hannya was formerly a Makai beast like Zabel's companion, Le Malta. It is thought that it came into the human world roughly 600 years ago. Oda Nobunaga had also worn the armor, though its appearance was apparently different. The armor would grant its master superhuman abilities, but in return would turn them into a blood thirsty killer. The armor would shine the more blood it bathed in, while the person wearing it would slowly lose their life.

After the age of war had ended, it would travel using antique shops to find new people for it to wear.

In the 1580s, a sword was forged by the name of "Onikiri." As a sword is used to cut a human, its edges would dull because of the fat and blood within a human body. But the Onikiri became sharper as it cut more people due to the way its edges were designed. People feared the sword to due the illusion that it would suck blood from a human body. It was said that if the user did not kill one man a day, the sword would drive it's user insane and force them to kill themselves.

After the time of peace had come, the Onikiri had disappeared for roughly ten years only to come back in a set with Hannya. By this time, it had already been affected by the evil aura of the cursed armor and had changed its own name to "Kien." The choice of name is unknown.