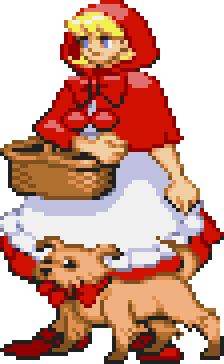 B.B. Hood (full name Baby Bonnie Hood) is known as Bulleta in Japan. Her profession was founded because droves of creatures from Makai had already flowed into the human world. Many of these creatures have since earned the interest of humans, be it scientific, prejudice, or simple curiosity. Items usable for decorations, materials that don't exist in the human world (such as the liquid and blood from their internal organs) are of keen interest, especially for research for bio-weapons and such. A "Darkhunter" is a job that was born to meet the demand for these clients.

These hunters hunt down creatures and get the reward money corresponding to the creature they hunt. The high risk is countered by the exceptional price tag attached to most demons. But because they hunt the creatures of the night, failure is not an option. Failing would mean one thing: death. To fight against these creatures, having a fit body, martial arts skills and firearms are not enough. It is possible for a Class-C creature to slaughter an entire army of first class elite soldiers. A strong mind and spirit is needed to keep one's self from losing their own sanity, and a dark heart is required so that they are not poisoned by the evil aura that the creatures emanate.

Several hundred Darkhunters are said to exist in the world, their skills varying greatly. Some of these hunters can barely kill a wild beast from Makai, let alone a Darkstalker. Within these hunters, B.B. Hood is a "Special S-Class" hunter. Her stare alone can cause the lower ranking Darkstalkers to be filled with fear, and she is able to deflect many kinds of physical attacks. Many say that she was born to be a Hunter.

Her dark heart was dark enough that Jedah considered her a Darkstalker and transported her into the Majigen as a worthy soul. When she was pulled into the Majigen by Jedah, she simply looked around and said, "Heh, they're all mine... it's been a long time since a job this big." 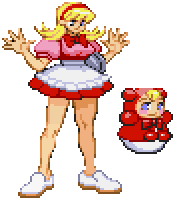 When hit by Anakaris' Pharaoh's Curse, she becomes a tiny doll. When attacked by Demitri's Midnight Bliss, she transforms into a waitress or maid, a subservient position counter to her anarchistic nature. However, unlike most of the Darkstalkers who give into Demitri's will and submit to his attack, B.B. Hood characteristically puts up a fight to the end. Bonnie's two-year old pet dog is named Harry, and he dutifully follows her into battle, despite his distaste for the loud noises that eventually follow. The two men who appear in Beautiful Hunting are George and Arthur (Smith and Wessen outside Japan). She is sometimes seen counting money while smoking outside of battles. She is also apparently a singer (her dog also helps too).

Attending the conference Hunters Guild of the Northern European Alpine Branch
Interchanging with the other Hunters is necessary to secure part of the final profit.
Obtaining weapons and ammunition through illegal means
A first class job requires first class materials.
Maintaining portable weapons at home
To every Hunter, skipping this is suicidal.
Making gunpowder mixtures for mines
Continuously researching is the sign of a professional.
Going to town to buy food and clothing, and going to Grandmother's house to do errands
Her feminine side can be seen here.
Training for controlled shooting
(such as shooting 50 targets while performing a 100m dash) Basic training is the foundation for advanced stuff. One must not forget to always return to the basics.
Using the satellite Catastrophe, a camouflaged military satellite, to retrieve information on Darkstalkers
Information gathering is the key to the current Hunter business. One must use any means possible to eliminate the target.
Enter the Dark Hunting Grand Prix held twice a year
A target is decided upon and they compete to see can hunt it down first. This is a competition for the Hunters to test their own skills, but not all Hunters compete in this tournament.