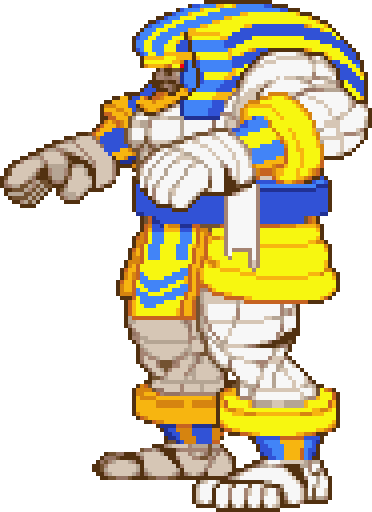 Anakaris is the 12th pharaoh of a great Egyptian empire. He became the pharaoh at the age of 12. Foreseeing his death and revival, Anakaris created a pyramid and a place for his revival. 5000 years later, he was revived when Pyron came along. In order to rule his kingdom once more, he gathered immense power from battling others and then traveled back 5000 years in time. When his kingdom came to be threatened again, he assumed the form of a mummy again to engage in the battles there. He eventually decided to protect his kingdom by moving it entirely into another dimension.

After battling with other Darkstalkers for a brief time, he travels 5000 years back in time to defend his kingdom once more. After fighting off the invaders of his kingdom, he then retaliates and conquers them. But once his kingdom is saved, he hears a voice from the far future. He travels to the present time and enters the Majigen. During the battles within Majigen, he learns that the destruction of his kingdom and people is unavoidable. In response to this revelation, he returns to the past and transports his kingdom beneath the Earth into a new dimension so that it may be free of the wars of Earth. 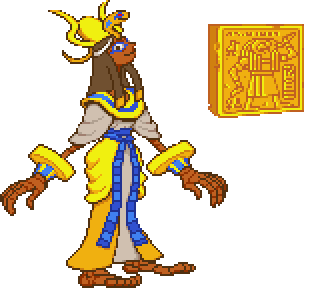 When hit by his own Pharaoh's Curse, he becomes a hieroglyphic tablet. When attacked by Demitri's Midnight Bliss, he transforms into a female representation of the rebirth god Bennu who is presented as a heron. However, when Demitri goes to grab the upper body, the lower body runs away. Unbeknownst to many, Anakaris has a partner. The Egyptians believed that one's shadow was a representation of their soul, or unconscious. They called this the Khaibit. Anakaris' Khaibit can be seen in several other animations, most notably when Anakaris splits his upper body from his torso.

2669 B.C.
The 11th emperor, Uros was enthroned.
2664 B.C.
The birth of Uros's first prince, Anakaris.
2662 B.C.
The second prince of Uros is born but dies shortly after.
2655 B.C.
The third son of Uros, Heterosos is born.
2652 B.C.
Uros dies at the age of 39. The 12th emperor Anakaris is enthroned.
2650 B.C.
The building of a pyramid started for Anakaris' revival. All the people of his kingdom worked on his pyramid.
2635 B.C.
Heterosos dies from an illness.
2634 B.C.
The pyramid was completed. 60 million people worked on the pyramid and 3,133 people became pillars for the pyramid.
2633 B.C.
Anakaris's kingdom was invaded by a neighboring country and Anakaris died in battle at around the age of 27. Following the wishes of Anakaris, his body is taken to the chamber of revival.
2632 B.C.
The invasion continues.
2630 B.C.
Anakaris is revived and saves his kingdom.
2629 B.C.
He instead invades the neighboring kingdom and takes them over. He then says that he hears a voice calling him from the future and disappeared.
26XX B.C.
His entire kingdom and people disappeared.

These are the words Anakaris spoke when he became the pharaoh. It can be seen that he had already possessed overwhelming charisma and leadership:

"Ultimate and immortal. The only and absolute. I am the true king of this golden kingdom which shines brilliantly. Anakaris the first. Those of you who kneel to me are granted the right to be protected equally under the name of god. But, if you refuse my protection and oppose me, you will be judged under god's name and will be burned with the flames of hell. Those who respect heaven will be given eternal happiness. Those who look down on heaven must pay the price of one's foolishness with one's own life I promise my eternal rule and I allow only souls worthy to gather to my knee's."