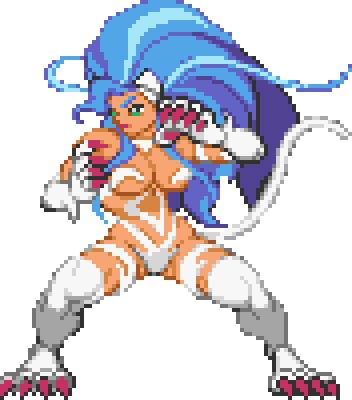 Felicia was a Catwoman who was taken in and raised by a Sister named Rose who gave her the name Felicia from the word Felicity. When Rose passed away, Felicia left her town hoping to be a musical star. During her travels, she met many other Catwomen of her kind. With her newfound friends, she set out for her dream of being on stage. Eventually, she and her friends successfully started a musical with Felicia being the main star. In the events of Vampire Savior, she wondered about how she could make others happy. In her ending, she constructed an orphanage and became a nun herself.

The existence of a semi-human race called Catwomen was something of a shock to humans, although a huge panic did not occur right away. The loving look that they had soothed people's rejection to them. The look that people gave them was a look of interest in a rare animal instead of a monster.

In America, the public voiced their opinion about how the Catwomen should be recognized and respected. Soon, they were given fundamental human rights. But people's prejudice didn't completely disappear. The musical that Felicia starred in was looked at like an exhibition. But once they had seen Felicia's dance and her lovely voice, the fact that she was a cat-woman made no difference. Felicia's loving personality was able to cleanse the dark parts of human hearts. 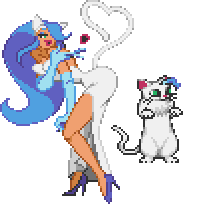 When hit by Anakaris' Pharaoh's Curse, she becomes a small white cat that walks on it's hind legs. When attacked by Demitri's Midnight Bliss, she remains very much like herself, but in her own image of success. Felica is a very good natured fighter and only inflicts as much damage as she needs to in order to win a fight. Most of her attacks are acrobatic and gymnastic in nature. She can summon many of her friends to aid her in battle. She also possesses the unique ability to charge up her own special meter at will.

The Catwomen race are born as normal human babies, but around the age of 4-6, they start to grow body hair, cat ears, paws and tails. They also gain the ability to transform into regular cats. Their sense of smell is several thousand times that of a human. They use this sense of smell to find other Catwomen. They also dislike sunlight and usually act at night.

As the name suggests, there are no men in the Catwomen race. They reproduce by mating with males of other species, and the offspring is always female.

When playing as Felicia, players are able to perform a special move that summons several other Cat-women to Felicia's aid. Although they are not named in the game at all, they each have unique origins and names. They are as follows: