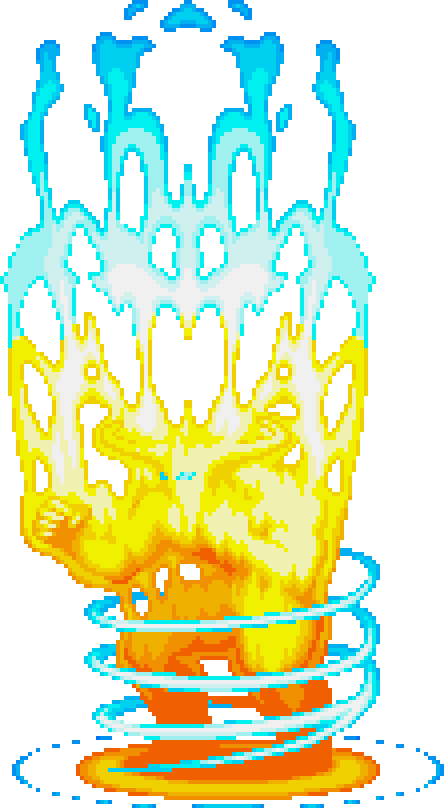 Pyron is a video game character from the Darkstalkers fighting game series and an alien from the planet Hellstorm. After evolving over many years, he became a cosmic being. Over the time of 200 million years, he sought to collect beautiful planets by consuming them. He lands deep within the Atlantic ocean to wait for the right time to consume Earth. In the end, he was defeated by Demitri and was consumed by him.

Originally, he came to Earth 65 million years ago and created the army of Huitzil robots to destroy life on Earth. It is unknown why Pyron didn't consume Earth back then, though it is assumed to be his lust for more worthy opponents. In the UDON comic, it is explained that Pyron wanted the Earth to "ripen" before harvesting it.

His appearance varies from attack to attack, but he is largely seen as a pair of blue eyes which can always be seen, despite a flickering body of flame that looks human in shape. Although the flames constantly shift, they seem to indicate a muscular stature, and two giant horns on either side of his head. Although he can assume any form that he wishes, and shifts his shape to suit his attacks, he primarily adopts an human shape to be on equal footing with his opponent. He is very confident of his ability to defeat any opponent and wishes to give them a fighting chance by "coming down to their level" in order to fight. He simply assumes that he will naturally win any fight, and battles simply to put lower beings in their place. 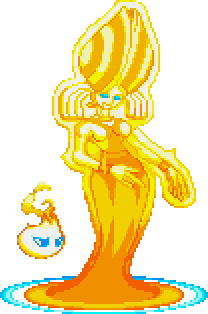 When hit by Anakaris' Pharaoh's Curse, it becomes a tiny flame with blue eyes. When attacked by Demitri's Midnight Bliss, he becomes what appears to be a female version of himself: an alien lifeform composed primarily of energy. Pyron is most likely meant to be representative of one of the fabled cosmic beings from Mars. The planet Mars is often associated with fire because of its bright red color as seen from Earth. This connection to Mars also explains the reasoning behind naming his army of robots "Phobos" (though they are renamed Huitzil in the American releases). Pyron's height and weight remain unknown; he is the only character in the series to have this enigmatic nature to both his size measurements, presumably because his shapeshifting abilities allow him to change either at will. If Pyron is electrocuted by a character with that ability (such as Victor), his "skeleton" appears as a constellation, indicating his cosmic nature. Although flame-based attacks will damage Pyron, he does not possess a "burned" sprite animation like other characters do; if hurt by fire, he will react as if injured by a normal attack. His name comes from pyro, the Greek word for "fire", which points out his physical nature in quite an obvious way.