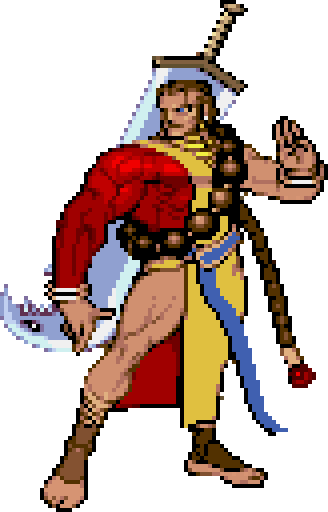 Donovan (full name Donovan Baine) is a Dhampir, the offspring of an affair between a vampire male and a human female. His true origin is unknown, however it is known that he was shunned as a child for his tainted blood. One day, a terrible event occurred in his hometown which had something to do with him. The end result was the death of everyone in the town, including his mother. Donovan wandered the world for a long time, following the teachings of Buddhism in an attempt to control his massive power as well as inner turmoil. Donovan is a man who seeks an answer to his cursed existence. Along his journeys as a wandering monk, he learned many things, and eventually came into possession of a gigantic magical sword known as Dhylec. This sword had the unique ability to channel the spirits of various elementals and gods for use of their power. Combined with his powerful telekinetic abilities, his strength, his mental discipline as well as the power of Dhylec and his spirit beads worn around his body, Donovan became a force of justice to be feared by all evil. The Darkstalkers' arrogance may have been their undoing with the creation of Donovan. 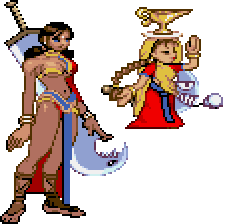 When hit by Anakaris' Pharaoh's Curse, he becomes a young Indian maiden who balances a lamp on her head. His sword Dhylec also shrinks into a caricature of itself and follows closely behind the maiden. When attacked by Demitri's Midnight Bliss, he transforms into a female version of himself. As a practitioner of many Buddhist mystical arts, Donovan has the ability to summon otherworldly spirits. Among those that he can summon are the fire spirit Ifrit, an ice spirit commonly referred to as Shiva, a lightning spirit commonly referred to as Raiden, and a finally a second unknown lightning spirit who appears as an elven maiden when Donovan performs his Killshread Lightning technique. In his Press of Death EX move, he summons a giant wind spirit to stomp his opponent.

One day on one of his many journeys, Donovan came across a young girl named Anita. She was an orphan, who was almost completely emotionless. Shunned by her orphanage as a witch, she exhibited a strange and unexplained power. As Donovan came onto the scene, Anita was threatened by a hideous monster. Coming in and easily dispatching the monster, he too is feared by Anita's cowardly guardians. As Donovan turned to leave, Anita began to motion towards Donovan without any words. The people explained that Anita had never exhibited any kind of emotion or word ever since her family was slaughtered by an unknown Darkstalker. Nonchalantly taking his sword Dhylec and slicing off the head of Anita's doll, he proved to the people that Anita's heart wasn't lost as she showed anger at Donovan decapatating her doll by responding with a violent psychic force. Donovan easily subdued the attack and told Anita that anger was the quickest and most easily summoned emotion, and that her anger was proof that she could still heal her own heart. With no where else to go, Donovan welcomed Anita to acompany him to not only find herself, but to help Donovan fight off the evil Darkstalkers as Anita had the unique ability to find them as well. Donovan would help Anita have her revenge and not follow the same troubled path as he.

Donovan couldn't figure it out, but he felt that Anita was special, and that she had to be protected. Thus, Donovan became Anita's guardian, and the "bane" of evil everywhere. He felt the presence of an oncoming evil on the horizon and knew Anita felt the same. Anita also has kept that headless Doll ever since. 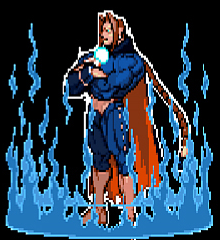 In his ending in Vampire Hunter, Donovan finally loses his humanity as he sacrifices himself somewhat in order to protect Anita as well as awaken her emotion again. Although Donovan is victorious, he succumbed to the dark part of his soul too much in order to do so. This tragic turn of events causes Anita to cry, and is symbolic in showing that Anita is finally whole again. Years later, a grown Anita wonders what became of Donovan, and she hopes he's okay. Sadly however, we find Donovan sitting on a throne, beside many bodies. He is fighting a neverending struggle with himself as he yearns for inner peace.

In Vampire: Darkstalkers Collection, a new secret character is unlocked in the "Arranged Versions" of Vampire Savior. This character is named Dee, and he is essentially Donovan with more powerful moves and a mix of Demitri's moves and a new projectile attack. He appears as Donovan's head put onto Demitri's red-colored body, with Dhylec floating behind. Dee is the true, present day Donovan, somewhat corrupted and a "what if" if his Vampire Hunter ending was indeed canon. In Dee's ending, he confronts Anita, who shows her true form and he begins to fight an older Anita. The outcome of this fight isn't shown but during the credits various pictures are shown of older Anita visiting a grave. It is assumed that the grave is Donovan's and that she won the fight and killed him, and it is still unknown whether this is a canon event or something of a "what if."