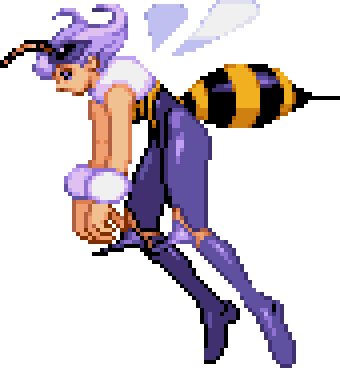 Queen Bee, a.k.a. Q-Bee (although this is a title rather than a name), is described as a bee-based monster called a "Soul Bee," born in Makai in an unknown year. Q-Bee and her race lived in the lands of the Dohma family. But during the time when Jedah was dead, her home began to crumble and her race was about to die. She headed toward the Majigen, which Jedah created after his resurrection, to gather souls to satisfy the hunger of the Soul Bees, as well as her own.

Q-Bee may look human or display humanoid-type features, but this is only a deception; her actual species is an insect called a Soul Bee. One of the more obvious characteristic would be her idle stance, where she simply hovers in place with her limbs dangling freely. One characteristic most would not recognize is the placement of her eyes on the top of her head. This is apparent in her fighting style and posture: she appears to be looking at the ground while her real eyes are looking at her enemy. You can think of her as a bee incognito in a human body.

When hit by Anakaris' Pharaoh's Curse, at first glance, she simply becomes a bee. But looking more closely, she really becomes a miniaturized version of herself. When attacked by Demitri's Midnight Bliss, she becomes a nurse with an unbelievably long needle (with which to sting her patient).