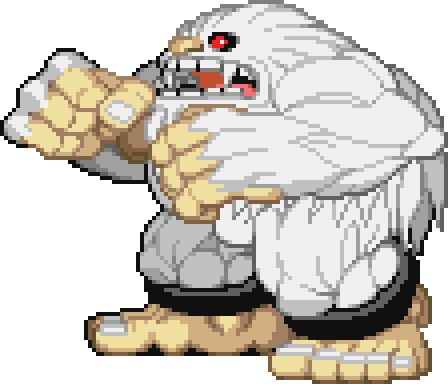 Sasquatch is the most noble of his tribe of Bigfoot that live deep in the Rocky Mountains of Canada. When he sensed the powers of the monster known as Pyron, he set out to find out what it was. After returning to his village, he finds members of his village have mysteriously disappeared. In the center of the village was a large hole. Determined that his fellow villagers have been pulled into trouble, Sasquatch jumped into the hole to find and rescue them. In the end, he found out that his fellow Bigfoot went willingly because Jedah gave them lots of bananas.

The village where the Bigfoot people dwell lies in a basin within the Rocky mountains of Canada. It is surrounded by steep mountains. Below their village is a huge frozen lake which is covered with thick ice. This is where they catch their primary source of food; fish. About 100 Bigfoots live in this village. To them, it is more like a big family than a tribe. The temperature of this area is constantly at -30 degrees Fahrenheit. Near the entrance to their primary settlement is a village called Crevasse. A snowstorm rages in this area all but constantly and as such it is very hard for a human to gain access. Even if they somehow manage, their rude intrusion may anger the native Bigfoots, slimming their chances of escape considerably.

The Bigfoots are not a violent people. In fact, they are friendly towards other races. But this is only if manners are shown. As long they are not treated as simply beasts and visitors show signs of sincerity, Bigfoots will show signs of friendship. To them, human sincerity means bananas or other delicious foods. To keep a good relation, food is an essential item. 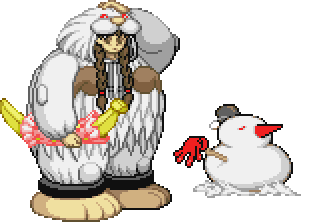 When hit by Anakaris' Pharaoh's Curse, he becomes a snowman with a pail for a hat, and a single stick for an arm with a glove hanging limply off the end. When attacked by Demitri's Midnight Bliss, he becomes a girl with pig-tails wearing a drastically oversized sasquatch costume, complete with a giant banana. Despite his tribe's initial intentions to battle with other makai tribes and humanity in order to take over, it seems that the Bigfoot tribe is one of the more harmless races in the Darkstalkers series. They were easily subjugated before this invasion by a human merely giving them a banana. This fruit would become the Bigfoot tribes most prized food, as well as become a slight obsession, possibly opening trade relations with the human race just to get the wonderful fruit.

They have their own distinct network using Makai Seals called "Makai Postal". This is the Bigfoot's information source and it proves a cultural and modern standard of living. Even when Sasquatch left his village, they used Stone Mail to contact each other. It's delivery service spans all over the world. It can send mails to the South Pole or North Pole within 4 days. This is due to the Makai beast, the Mach-Crab race.

The Interchange between other Makai creatures[edit]

The tribe of the Bigfoots has many ties with other races outside of humanity, these allies are evidenced in some of Sasquatch's attacks.

The penguins that appear during Dark Force are known as Snowslide Penguins. They live together in the same village as the Bigfoot's. They are helping Sasquatch when they hear about the disappearance of their village members. Their desperate attacks tend to draw tears. The Snowman belong to a Makai race called the Snowman race. They have the ability to make it snow or to cause the temperature to fall. To aid Sasquatch, they follow him into Majigen.

The Snow Beast race(the sled dogs that appear during Big Sledge) are a very shy race. They are very friendly towards the Bigfoot race but rarely show themselves. But when it is urgent, they quickly appear and pull Sasquatch very powerfully. The Small Makai Whale is a long time friend of Sasquatch. It's huge blow from it's tail is always powerful. There have been interchange since the tribe leader Tundra was young.