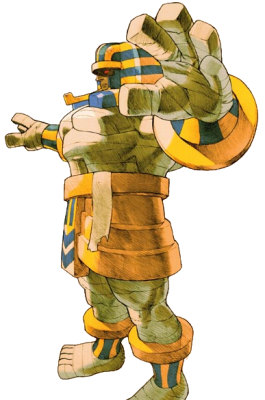 For more information about Anakaris, please see his Darkstalkers entry.

Anakaris is originally from Capcom's Darkstalkers series. He is a giant mummy. He was the twelfth pharaoh of a vast empire in Egypt. Anakaris makes a surprising selection for the Capcom camp in Marvel vs. Capcom 2. It is unknown how or why he enters the Marvel universe to fight Abyss, which threatens the existence of both universes. He may have been summoned along with B.B. Hood and Felicia by Morrigan.

This incarnation of Anakaris is slightly faster, although still one of the slower characters in the game, especially when it comes to jumping. Never the less, he certainly benefits from MvC2's combo system, as he is able to pull off some impressive moves back to back for substantial damage. He maintains most of his Darkstalkers moves, with slight exaggerations. One of his new (or modified) EX Moves is the Serpent Coffin which is an enhanced version of his Cobra Blow. In this variation Anakaris opens his coffin and releases three to four giant serpents at a time thrusting very fast horizontally. Repeatedly tapping the buttons increases the number of serpents coming out.

His Ouke no Sabaki move can still transform an opponent, although not into a character specific icon, but a little mummy that worships Anakaris. Unlike in Darkstalkers, the character will transform back to their original shape as soon as they are hit. His only unique Hyper Combo in MvC2 is the Pharoah Illusion whereupon he transforms into a gigantic form of himself with his hands suspended in the air and volleying the opponent back and forth. It starts instantly, and you must control Anakaris' hands with the punch and kick buttons in a rhythmic pattern in order to continue juggling your opponent before the move ends.