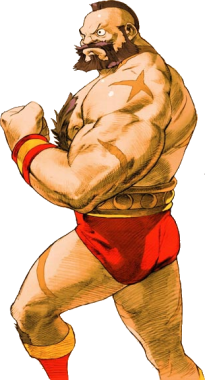 Out of all the Street Fighters summoned to the Marvel Universe, Zangief is the most confused. Believing himself to be kidnapped, he begins to rampage around the X-Men mansion until a chance encounter with mutant and fellow Russian Colossus calms him down. Zangief is delighted to see that the strongest physical X-Man is another Russian and implores Colossus to be his partner. However, Colossus is unable to join the events that take place during X-Men vs. Street Fighter, so Zangief chooses the physically largest partner available, Juggernaut. With all of their strength, and very little intelligence between them, they make it quite far, but fail to find Apocalypse due to their own incompetence.

Zangief is in for two shocks during Marvel Super Heroes vs. Street Fighter. He is excited when he discovers that another Russian will take part in the second battle against Apocalypse, only to become bitterly disappointed when he find out that Omega Red is in fact a villain. Refusing to have anything to do with him, he fights instead with the Hulk. The pair do much better, thanks in part to Bruce Banner's smarts. Knowing that Apocalypse is being dealt with, they chase Shadow to M. Bison's temporary headquarters, only to lose him. While exploring through the base, they stumble upon a mechanical double of Zangief. Tinged in blue, this robotic monstrosity seems to have all of the strength and many of the moves of Zangief. Enraged at the sight of the robot, but not realizing that it is mechanical, Zangief attacks what he believes is the Marvel Universe version of himself. He eventually subdues the robot and is very surprised and troubled when he discovers that it was never alive.

Asking the Hulk's advice, the Hulk suggests that Zangief talk to some of Marvel's greatest minds like Reed Richards or Dr. Strange. Having questions about the effects of her sunburn, Sakura agrees to accompany him. They were unable to locate Reed Richards (the Fantastic Four were off fighting Dr. Doom again), but they did manage to locate Dr. Strange. After Doctor Strange helped Sakura will the effects of the sunburn on and off, he cast a spell on Zangief which gave him the ability to transform into the robotic version of himself at will. The spell would wear off the moment Zangief returned to his own universe, so he remained in the Capcom Universe throughout the events of the first and second Marvel vs. Capcom.