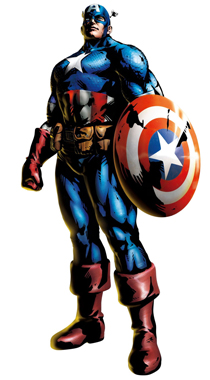 Captain America is the alter ego of Steve Rogers, a sickly young man who was given enhanced strength and reflexes by an experimental serum in order to aid the United States war effort. Captain America wears a costume that utilizes an American flag motif, and is armed with an indestructible shield that can be thrown as a weapon. Captain was revived from suspended animation by the superhero team The Avengers. Since then, Captain America has often led the team.

Captain America represents the pinnacle of human physical perfection. While not superhuman, he is as strong as a human being can be. He can lift (press) a maximum of 800 pounds with supreme effort. Captain America has agility, strength, speed, endurance, and reaction time superior to any Olympic athlete who ever competed. The Super-Soldier formula that he has metabolized has enhanced all of his bodily functions to the peak of human efficiency. Notably, his body eliminates the excessive build-up of fatigue-producing poisons in his muscles, granting him phenomenal endurance.

Captain America's only weapon is his shield, a concave disk 2.5 feet in diameter, weighing 12 pounds. It is made of a unique Vibranium-Adimantium alloy that has never been duplicated. The shield was awarded to Captain America by the government several months after the beginning of his career. The shield has great aerodynamic properties: it is able to slice through the air with minimal wind resistance and deflection of path. Its great overall resilience, combined with its natural concentric stiffness, enables it to rebound from objects with minimal loss of angular momentum. It is virtually indestructible.

For a time, John Walker assumed the identity of Captain America when Steve Rogers chose not to do so. After Steve decided to return, Walker remained a super hero and took the identity U.S. Agent. As a result of the experimental mutagenic process conducted on him by the Power Broker, John Walker has superhuman strength. His endurance is also heightened albeit to a lesser degree. His speed, agility, dexterity, reflexes, coordination, and balance are of the order of a superior Olympic athlete.

Aside from the above advantages, U.S. Agent is an exceptional hand-to-hand combatant trained in Captain America's own fighting style. He is also a seasoned combat veteran with military combat experience and is highly proficient in the use of conventional firearms. He is capable of using his shield for defensive purposes and as a weapon. He has great accuracy at throwing his shield and due to his superhuman strength, it is potentially a lethal weapon.

Although a distinctly different character than Captain America in the Marvel universe, he is just a palette swap in the game. While his moves are identical to Captain America's, he moves a little faster.