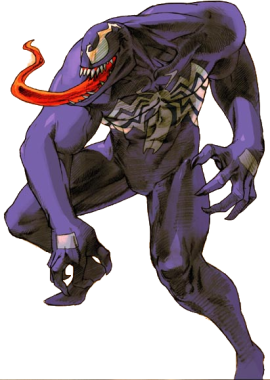 Venom is the bonding between the human host and an extraterrestrial parasite known as the Venom Symbiote. The symbiote returned to Earth with Spider-Man at the end of the events of the Marvel miniseries Secret Wars. Soon, the symbiote began to exert more and more influence over its host, eventually threatening to take over. Spider-Man eventually was able to free himself, and the symbiote later found and bonded with Eddie Brock, a reporter. Originally, the Venom symbiote was portrayed as a mute and lonely creature craving the company of a host. More recently, it has been shown as increasingly abusive of its hosts, and having the powers of speech.

Brock was a reporter for the Daily Globe who had been fired after Spider-Man debunked his would-be career story, "the Sin-Eater case," humiliating him and ultimately ruining his career. He is then forced to find work writing for cheap gossip magazines, thus causing his utter loathing of Spider-Man. Prior to being fired, Brock found out he had cancer and had only his writing to keep his mind off it. As Venom, he fought Spider-Man many times, and came close to winning on several occasions. As well as fueling Eddie's rage against Spider-Man, the symbiote allowed him to indulge in a sporadic career as a vigilante.

Though it requires a living host in order to survive, the Venom symbiote has been shown on some occasions to be able to fend for itself with its own set of unique powers. The symbiote is telepathic and does not require physical contact to influence the minds of others. In Planet Of The Symbiotes, the creature, after being rejected by its host, emits a psychic scream which drives nearby humans to states of extreme depression. Later, with the assistance of Eddie Brock, it emits an even more powerful variant of that power which results in the mass suicide of an invasive force of symbiotes. The symbiote can also blend with any background, using an optic-camoflauge type of effect. Though the symbiote has rejected its species habit of consuming its hosts, it still requires certain chemicals found in living brain tissue (most likely phenethylamine) in order to survive. When starved of these chemicals, the symbiote develops a mutable exoskeleton, allowing it to form its own solid body which it uses to hunt and kill prey without the assistance of a host.