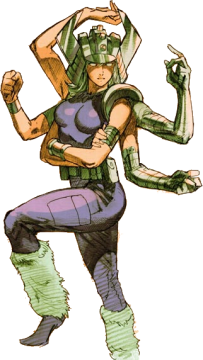 Spiral's real name is Rita Wayword, a.k.a 'Ricochet Rita', a professional stuntwoman who befriended Longshot when he first appeared on Earth. The story of how Rita became Spiral is a paradox: Rita was attacked by her evil, future self which led to her meeting Longshot, falling in love with him and traveling with him to his home dimension, the Mojoverse. Longshot and Rita were captured by the dimension's evil overlord, Mojo. Longshot was promptly mindwiped to forget all about Rita, while a much worse fate was left for Rita.

After holding her prisoner for several years, Mojo forced his chief scientist, Arize, to perform extreme physical and mental body modifications onto Rita to recreate her into a loyal subordinate. These experiments left her with six arms (some of which are robotic), turned her hair grey, and drove the young woman insane through forcibly evolving Rita's mind to the point that she could see into other dimensions that were used for time-travel/teleportation. Finally, in a cruel act of manipulation, Mojo sent Spiral back in time to set into motion the events that led to her former self becoming Mojo's prisoner and become Spiral by attacking her past self.

She was responsible for giving Psylocke cybernetic eyes, which doubled as cameras for Mojo to spy on the X-Men. Along with Mojo, Spiral was shown to have played a role in Psylocke becoming Asian. Originally, it was believed that the two literally transformed Psylocke from being British to being Asian, but it was revealed that Spiral (without Mojo's involvement) transferred the X-Man's mind into the body of the Asian assassin Kwannon.

Spiral has powerful mystical abilities. With gestures or dance moves, she can teleport herself and numerous people across great distances. Teleportation and powerful spells require more complicated dance moves. Spiral's spellcasting powers can be triggered through small hand gestures of her many hands. Spiral often incorporates knives and swords into more complicated spells. Spiral can also disguise herself through her magic. Spiral can open gateways between dimensions and travel through time. As a result of being cybernetically enhanced on Mojo-world she has some limited level of superhuman strength. Spiral is a highly skilled hand-to-hand combatant and sword fighter. Her six arms are fully coordinated, giving her great dexterity and athletic ability. However, Spiral will often lose to less powerful opponents due to tendencies of overconfidence, toying with her foe for too long, or becoming distracted.