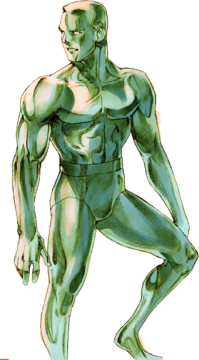 One of the original X-Men, Iceman (Robert "Bobby" Louis Drake) can freeze moisture in the air around him and turn his body into ice. Although he is an Omega-level mutant, Drake has yet to tap his full mutant potential. He has however begun to take more interest over the years in developing his abilities. Bobby tends to be very light-hearted, even irreverent, in non-threatening situations, but he becomes very serious when a mission requires his abilities, especially when it means the rescue of his friends and loved ones.

Iceman is able to lower his body temperature without causing harm to himself, reaching negative 105°F within a few tenths of a second. He is able to freeze any moisture in the air around him into unusually hard ice to form ice-slides and various projectiles and shields. He can travel rapidly along these ice-slides or ice-bridges by causing ice to form rapidly beneath and behind his feet, pushing him along the slick surface. He is also able to summon moisture from the air and create a flood. Iceman is immune to sub-zero temperatures.

Over the years, his mutant physiology has gone through radical changes. First, he was able to fashion an armor of densely packed snow around his human form when lowering his temperature; later, this became an armor of solid ice. In normal human form, he has the strength, agility, and durability of a typical athletic male of his size. In his ice-form, his strength and durability are enhanced. An Omega-level mutant, Iceman's powers have evolved considerably over the years. Apocalypse considers Iceman to be one of the twelve most powerful mutants on Earth.