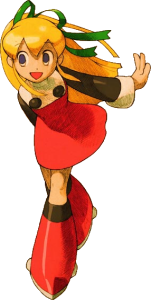 Roll is a female character in the Mega Man series in its many continuities, and is largely considered to be the female lead in many of them. Not much is known about Roll compared to the other characters, except she was designed for housekeeping instead of fighting. She's the younger counterpart of Mega Man (although other sources indicate they are "twins"). She is the gentle and cute "little sister" of Mega Man, though they have no physical relation outside of looking slightly alike and both being made by Dr. Light. Appearancewise, she's a little blonde girl wearing a red dress, a ponytail with green ribbons and red Mary Janes. She is the third robot created by Dr. Light, built as his assistant, mainly in housework.

Roll acts like a sister to Mega Man (originally known as Rock) in every way, right down to their attitude. Roll is a caretaker robot, like Rock was before he was converted into a powerful warrior. Therefore her role in the series is always very much that of a supporter. Her view of the world is idealistic, similar to that of Dr. Light and Mega Man's, but unlike them she takes no direct part in the changing of the course of it. She's simply there to support Mega Man, whom she loves dearly. Roll first appears very briefly during the ending of the very first game of the series. As a result, her name was never mentioned until Mega Man 3, where her entry in Dr. Light's robot list is shown during the ending. Roll's design changed in Mega Man 8, with a more detailed dress and boots, as well as green ribbons in her hair. Her hairstyle also changed slightly, details being added to her bangs and ponytail, and she's seems a bit taller as well.

While she was not designed for fighting, she is a secret combatant in Marvel vs. Capcom and an official contestant in Marvel vs. Capcom 2. In those games, she proves that she has about the same fighting qualities of Mega Man, only much weaker and softer, being even weaker than Dan Hibiki in the latter game (she even uses flowers in some attacks). In those games, she possessed an external "Roll Buster". Ironically, Roll is considered one of the most effective characters to use against the final boss of Marvel vs. Capcom, Onslaught—her diminutive size negates Onslaught's massive beam attack, and her attacks can easily strike him. She can employ all of the same Eddie items, and Hyper Combos that Mega Man can.