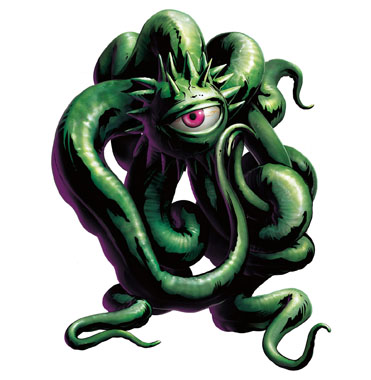 Shuma-Gorath resembles a giant green eye with tentacles. Although his true origins are unknown, before the arrival of the First Host of the Celestials, Shuma-Gorath ruled the Earth and commanded human sacrifice, until the time-traveling sorcerer Sise-Neg banished him. He managed to return and set himself up as a god during the Hyborian Age, again commanding bloody sacrifice, but slaughtered those who sought his favor. Eventually, the power of Crom imprisoned him within a mountain. Even from that prison, he could interact with Conan the Barbarian, Kulan Gath, and many others, before Crom banished him back to his home dimension.

When Shuma-Gorath tried to return to Earth through the mind of the Ancient One, he forced Doctor Strange to kill his master to prevent the powerful creature from arriving on Earth. Years later, Strange was forced to destroy the talismans keeping the chaos demons at bay, to keep them from falling into the hands of an evil sorcerer. Strange was then forced to travel to Shuma-Gorath's dimension and fight it there to prevent the demons from invading Earth. To do so, Strange had to absorb the chaos magic into himself, gaining enough power to destroy Shuma-Gorath. However, he started to transform into a new Shuma-Gorath himself as a result, so he committed suicide to prevent that from happening. Fortunately, an ally of Strange was able to purify him on his way back to the living. Shuma-Gorath resurrected himself not long after from the remnants of the chaos magic.

Shuma-Gorath is a powerful and ancient demon of the highest order and possesses vast supernatural powers. He is essentially invincible to anything but the most powerful magic. He has superhuman strength and endurance which, being magical in nature, are incalculably high. Because of his body's unique form, he has the ability to shapeshift and even liquefy himself. He also has the ability to generate several forms of energy attacks, mostly forming from his one eye. One attack not generated from his eye is when he forms a ball of pure energy that can shatter realities using all of his tentacles to generate the ball above himself. He can also teleport and phase at will and levitate (which is just magically flying). He can enter and leave different planes of existence and dimensions at will and has reality warping powers. He can also summon demons and other supernatural creatures to do his bidding. His intelligence is nearly immeasurable, approaching omniscience.