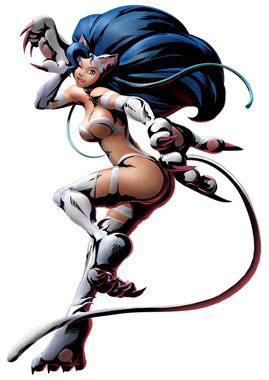 When Felicia, a rare example of a Darkstalker catgirl, arrived in the Marvel Universe, many of the super heroes believed that she was an ordinary Marvel Universe mutant. Summoned to the universe, possibly by Morrigan, Felicia was happy to help with the battle against Abyss that threatened the collective Marvel and Capcom universes. She fought not only for herself, but also for the children that she cared for at her orphanage. She was not at all thrilled to see Baby Bonnie Hood, however, as she considered Bonnie to be a mean person. As a result, she puts aside her desires for fame, and was determined to be useful and prove to everyone that not all Darkstalkers make it a point to harm humanity.

Her appearance in Marvel vs. Capcom 2 is based largely on the Vampire Savior iteration of her character as opposed to her two previous versions. None of her moves have changed all that much from the Darkstalkers series, they're just flashier. All of her assist types use the Hyper Sand Splash in Variable Combination attacks. Her Rolling Buckler attack does minimal damage by itself and must be followed up with another attack in order to be more useful. Unlike most wall jumpers, Felicia has the ability to actually cling to the wall, like Strider. However, in order for her to do it, you need to jump back, return the joystick to neutral, and push back again before you touch the wall. You can Wall Slide at will, or after you've attempted to cling to the wall for too long.