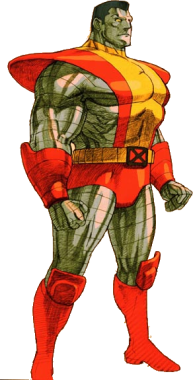 A Russian mutant, Colossus possesses the ability to transform his entire body into "organic steel," a state that grants him tremendous superhuman strength, stamina, and durability. Born Piotr "Peter" Rasputin, he is by far the physically strongest X-Man. A talented artist, he reluctantly agrees to use his powers in combat, feeling it is his responsibility to utilize his abilities for the betterment of human and mutantkind.

Peter's superhuman powers emerged in adolescence while saving his sister from a runaway tractor. At first, Peter was content simply to use these powers to aid the other people of the collective; however he was soon contacted by Professor Charles Xavier, the founder of the X-Men. Xavier was recruiting a new team of X-Men to rescue the original team, most of whom had been captured by the sentient mutant island Krakoa.

Colossus possesses the ability to transform his entire body into a form of "organic steel", with properties analogous to osmium but of still unknown composition. In his armored form Colossus possesses vast levels of superhuman strength and stamina, the upper limits of which are unknown. Colossus' physical strength is currently greater than when he first joined the X-Men, since he was a teenager at the time. While in his armored form, Colossus is also highly resistant to physical injury.

Colossus cannot transform only a single portion of his body into this armored state; he must either transform completely or remain within his normal state. When he transforms, he gains around a foot in height and his weight is at least doubled. Colossus is also an excellent hand-to-hand combatant, having received training from Wolverine and Cyclops. He also has had training in acrobatics and sword fighting from Nightcrawler. In his human form, he is exceptionally strong and fit, though not superhumanly so.