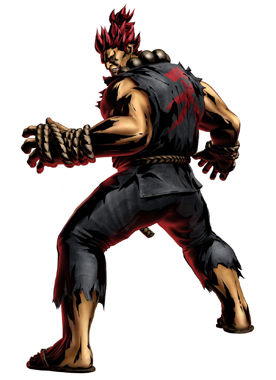 Akuma was the first Capcom character to appear in any of Capcom's Marvel fighting games, even before it became a cross-over series. He was first added as a secret character to X-Men: Children of the Atom, as an in-joke referring to the fact that Akuma's first appearance was in Super Street Fighter II X in Japan, thus making him a sort of X-Man in his own right. Based largely on the SSF2X version of Akuma, he was fairly unaltered, gaining the ability to super jump, a damaging retaliation move, and access to both Ken and Ryu's super moves. Unfortunately, the motions required for them were so similar, it was difficult to consistently perform the specific move you wanted.

When Akuma reappears in X-Men vs. Street Fighter, he has receives some power augmentations as a result of being in the Marvel Universe. His Gou Hadouken is slightly larger than usual, although not nearly as large as Ryu's. His Tatsumaki Senpukyaku has an added lightning effect that electrocutes opponents. His Tenma Kuujin Kyaku hits multiple times on the way down. And the strongest Gou Shoryuken lights people on fire (in fact, in Marvel Super Heroes vs. Street Fighter, Akuma is covered in purple flames for every strength and ignites opponents). His Messatsu Gou Hadou comes out as a giant beam, like Ryu's. Tenma Gou Zankuu launches close to 20 fireballs. The remaining Hyper Combos, Messatsu Gou Shouryuu and the infamous Shun Goku Satsu are similar to their Alpha versions (in fact, in X-Men vs. Street Fighter, Akuma only needs on level of super meter to perform Shun Goku Satsu, and is the only Hyper Combo that Rogue can steal from an opponent!)

In Marvel vs. Capcom, Akuma's presence is replaced by "Complete Change" Ryu, who has the ability to invoke the fighting spirit of Ken and Akuma during a match. He returns in earnest in Marvel vs. Capcom 2 with two additional moves. He gains a new throw special move, the Jigoku Guruma which must be performed close to connect. And he gains the Messatsu Gou Rasen, which is a super hurricane kick move. It moves vertically, and it must also be performed rather close in order to suck the opponent in.