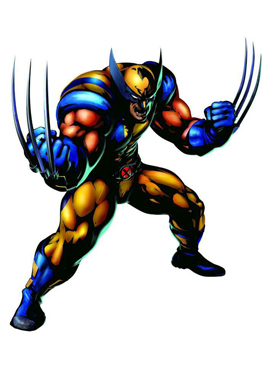 If the Marvel vs. Capcom series was any indication of popularity, Wolverine would win the contest hands down, with more incarnations of Wolverine then there are games in the series. Wolverine is the only character to appear in every single Marvel game that Capcom published, and the only character with two distinct entries in Marvel vs. Capcom 2. He is featured with his Adamantium laced bones, as well as the version of Wolverine that appeared for a time with the Adamantium stripped from his bones by Magneto.

Wolverine, James Howlett or commonly known as Logan, is a Canadian superhero and a member of several teams, including the X-Men and the New Avengers. Wolverine stared in the eponymous limited series in which his catch phrase, "I'm the best there is at what I do, but what I do isn't very nice" was first written. Wolverine joined the X-Men's "All New, All Different" roster in Giant-Size X-Men #1. Wolverine was symbolic of the many tough anti-authority anti-heroes; his willingness to use deadly force and his brooding nature became standard characteristics for comic book anti-heroes by the end of the 1980s. As a result, the character became the clear favorite for fans of the increasingly popular X-Men franchise.

As a mutant, Wolverine possesses animal-keen senses, enhanced physical capabilities, and a healing factor that allows him to recover from virtually any wound. This healing ability enabled the supersoldier program Weapon X to bond the near indestructible metal alloy adamantium to his skeletal system that includes razor-sharp retractable claws. He is also a master of hand-to-hand combat and martial arts.

In a dark moment for the X-Men, Magneto and the Acolytes state their intentions to wipe out humanity from Avalon, their space station. Magneto unleashes an electromagnetic pulse on the Earth that creates havoc on the world's electrical systems. Professor X assembles Jean Grey, Gambit, Rogue, Quicksilver and Wolverine to go to Avalon and stop Magneto. The team boards Avalon and disables the station with a virus created by Beast. Magneto engages the X-Men in battle, and in a fit of rage, tears the adamantium out of Wolverine's skeleton. Professor X, enraged by Magneto's actions, mindwipes Magneto, leaving him in a coma. The X-Men race back to Earth to treat Wolverine. As Wolverine recovers from his injuries, he and the X-Men learn that his claws were a part of his actual skeletal structure all along, as he now possesses claws made of bone. Eventually, Apocalypse rebonded adamantium to his skeleton.