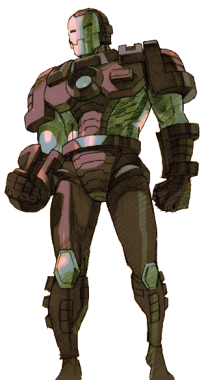 War Machine's (Jim Rhodes) abilities came from an advanced suit of armor, designed using technology from Stark Industries, and later from an alien-built suit. He is well known as the best friend of Tony Stark, whose Iron Man armor Rhodes has worn on several occasions. Stark also subsequently designed a heavier-armed version of the Iron Man suit, the "Variable Threat Response Battle Suit" to battle the Masters of Silence, and it became known as the War Machine armor. Rhodes used the War Machine armor as Iron Man when Stark faked his own death while recovering from a life-threatening illness. When the ruse was revealed, it damaged the friendship between the two men, and they went their separate ways.

Rhodes, however, continued to use the War Machine armor in a solo superhero career, and it eventually was replaced by a symbiotic alien suit, known as the Eidolon Warwear. When Stark died during a battle with Kang the Conqueror (And the younger alternate Tony Stark brought in to replace him vanished during the fight with Onslaught), Rhodes rejoined Stark Enterprises (which was bought by Fujikawa Industries) to protect his old friend's legacy. To prevent Stark's armor technology from being misused, he used the abilities of his alien armor to erase all trace of Stark's designs from the Fujikawa systems, but the armor was destroyed in the process. Rhodes gave up his superhero career and started his own salvage company.

Hyper Armor War Machine has Hyper Armor. All of his laser attacks now fire missiles instead (e.g. his Shoulder Cannon and Proton Cannon). His moves are identical to regular War Machines's moves, except he can not perform the Repulsor Blast, Flying, or Air Dash.