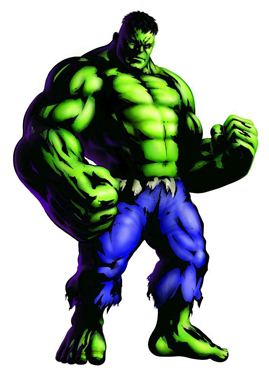 After physicist Dr. Robert Bruce Banner was caught in the blast of a gamma bomb he created, he was transformed into the Hulk, a raging monster. The character, both as Banner and the Hulk, is frequently pursued by the police or the armed forces, often as a result of the destruction he causes. While the coloration of the character's skin varies during the course of its publication history, the Hulk is most often depicted as green. In forty years, he has battled virtually every hero and villain in the Marvel Universe.

The Hulk's portrayal has varied widely. He has been described as differently as a clumsy, stupid brute who stumbles into adverse situations and lashes out, to a dedicated schemer seeking confrontation for personal gain, and from a cool, collected consciousness capable of advanced science and leadership to an easily manipulated engine of destruction. The Hulk initially was characterized as a separate entity from Bruce Banner, a symbol of inner rage; anger that gradually developed its own personality and memories separate from Banner's. Later stories attributed the Hulk to repressed emotions caused by childhood abuses by Banner's father. In all of the Capcom games, Hulk's persona is that of his merger with Bruce Banner.

The Hulk possesses the potential for near limitless levels of physical strength, depending directly on his emotional state, particularly his anger. He is also extremely resistant to physical damage, psychic assaults, temperature extremes, and is completely immune to disease and poisons. He can breathe underwater, survive unprotected in space, and when injured, heals from almost any wound within seconds. His powerful legs allow him to leap into lower Earth orbit or across continents. His durability, healing, endurance, and possibly speed, likewise increase in relation to his temper. As Bruce Banner, he is considered one of the greatest minds on Earth. He has developed expertise in the fields of Biology, Chemistry, Engineering, Physiology, and has a PhD in Nuclear Physics.

This version of the Hulk has no Super Armor, but it's easier to air combo with him (the attacks come out faster, and his MP is no longer an air combo finisher). His moves are identical to regular Hulk's moves.