In the latter half of the game (Discs 2 and 3) it's possible to rent chocobo stables, breed chocobos, and use your own chocobos in Golden Saucer Chocobo Square racing. The earliest point in the game when this is possible is right before getting the third and fourth Final Fantasy VII/Huge Materias.

The special abilities of these Chocobos allow to access Materia caves, which is the only way to get some rare materia.

There are four special Chocobos:

A gold Chocobo will also allow you to get Vincent Valentine's Level 4 Limit Break before you get the submarine, and in turn see the secret "Lucrecia scene". As well as that, you can access the Ancient Forest near Cosmo Canyon before defeating Ultimate Weapon. This area is full of great weapons, as well as the Slice-All materia.

You'll spend a lot of time racing Chocobos if you intend to get a Gold Chocobo. Luckily, this is not only enjoyable, but by the time you get to B/A class you're getting more GP a race than you could get in an hour in Wonder Square. This will allow you to get some of the rare items available from the women in Wonder Square.

These four small areas with four great prizes are probably the main reason for breeding chocobos.

To do nothing, press 'O'[edit]

On the PS version, if you have used the configure screen to swap the

buttons, the chocobo stable will be unusable: every time it tells you to press

will cancel out of the screen, whereas pressing

So, go swap your buttons back until you've left the chocobo stable.

Firstly, to catch Chocobos you will need to have the Chocobo Lure materia equipped. You can buy this from Choco Billy at the Chocobo ranch. To improve your chances, level up your Chocobo lure materia as much as possible, and try to get your luck stat as high as possible using Luck Plus materia and the Amulet accessory, which you can purchase at Mideel before it is devastated by lifestream.

Most importantly, you'll need to rent some stables. If you can, get all 6, if not you'll need at least 4. Stables cost 10 000 gil (nothing compared to what you'll be spending on greens) and you can buy them from the ranch owner in the western building. You'll also need enough money to buy about 300 Sylkis Greens from the Chocobo Sage (visit his house located near the Icicle Inn). This will cost you about 1.6 million gil in total.

Once you are set up, find some Chocobo tracks (see the table below). If your luck is high enough, and you have a good Chocobo lure you should run into a Chocobo 95% of the time. After that, there are basically two methods of catching your Chocobo:

Once you have killed of the Chocobo's escorts you will get a message saying 'Caught a Chocobo!'. You can then ride the Chocobo around. Once you are finished, press X to get off the Chocobo and when prompted, select 'Send back to the stables'. You can keep up to 4 Chocobos outside the stables before moving them in/releasing them.

Tips for getting the 'right' Chocobo[edit]

Even with weak Chocobos you should be able to get through C and B class without having to use manual control. However, you may start to have some difficulty when you get into A and S class or when you go up against Joe and TEIOH.

First off, always hold down

throughout the race, this will regenerate your stamina. (for the PC version, hold down Page Down+Target) If you're having trouble winning a race, try racing the Long course (since most Chocobos will let you down on speed rather than stamina). Start of the race by sprinting (hold circle) until you get to around 1/5 stamina left. At this point you should have a comfortable lead, press Square until your Chocobo is going full speed and just run until you get near the end. You'll want to spend whatever stamina you have regenerated at the home stretch, which you means you'll have to judge how far what stamina you have will let you sprint. With this technique I have managed to not only beat any S class race but also beat TEIOH with a Chocobo with just 90 speed and 700 stamina.

On an unrelated note, if you have either Tifa or Cid in your party, they may ask to ride. Whatever you choose, it won't affect your game. 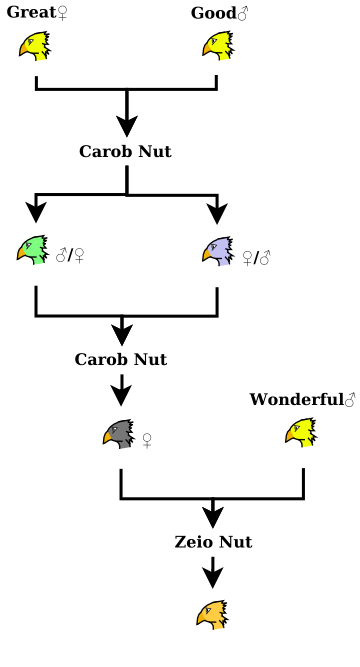 There are two ways to get a Golden Chocobo. The first method is to breed one on the Chocobo farm. The disadvantage of this method is that you need to spend a couple of hours at the race track and possibly sell some stuff to fund this. The other method is to defeat the Ruby Weapon to obtain the Desert Rose. Once you are in possession of this simply take it to the Kalm Trader who will exchange it for a gold Chocobo. However, it is much harder to defeat Ruby Weapon without the equipment and materia one can only acquire using the special chocobos.

Getting a Golden Chocobo through breeding is actually quite easy - don't let the peoples' talk of this being hard disappoint you, if at all this can get a little bit boring. It just involves tons of resetting and luck manipulation if you want to do this the fast and logical way.

For this, you need:

Now, the gender of the caught yellow chocobo is determined when they are moved to the stables - not before. The best strategy is thus to save the game outside the stables on the world map, then go talk to Billy, and if you happen to get wrong gender, just reset.

The gender of a bred colored chocobo is determined completely randomly. Thus, the most annoying part of the whole breeding is that often, you not only need to get the color right, but also the gender. Luckily, it doesn't take that long to know the gender, so if you get the wrong one, reset, and hope for the best next time.

Sylkis Greens are the most difficult part of the process to get right. Basically, these are used to boost your chocobo's stats. This isn't necessary, strictly, but it makes getting a gold chocobo far more likely.

Firstly, there are number of theories on what chocobos should be boosted to A-S rank. It's definitely easy to get a gold chocobo with all chocobos at A or S, but some say that only the black female and wonderful yellow male need to be A or S.

Then, the amount. Some say 40 Sylkis Greens is all you ever need (to boost up the black female and the wonderful male). A proven theory is to feed all chocobos greens in bunches of 20 greens every time they lose a long round of racing. (Excluded from this definition of "losing" is losing to Joe and TEIO — beating that pair is nearly impossible without a golden one anyway...) Some say that the best way is to simply feed each of them 99 Sylkis, but that may be serious overkill, because the stats will max after about 40-60 Sylkis fed.

Sylkis Greens are sold by the Chocobo Sage on the northern continent. They cost an arm and leg to get. Many people seem to buy one, then resort to the W-Item cheat to get tons of Sylkis. I abused a lot of Mideel critters and ultimately sold a mastered All materia.

Basically, you need to take your Great and Good breeding pair, feed them some Sylkis, then race them on Gold Saucer until they're both class A or S. While this is not strictly necessary, it greatly increases the chances of them producing a special offspring. Two class C chocobos can produce special offspring, but the odds are so low it will likely take hours of trying, failing, and restarting in order to get the desired results.

Either way, you need to breed your Great Female with the Good Male, give them a Carob Nut, and the end result should be either a green or a blue chocobo. The first time you breed these two, it doesn't matter what color/gender combo you receive. The parents won't breed again right away, though, so meanwhile, you should again Sylkis this colored chocobo up and race it to class A or S. Fighting battles seems to help pass the time as well or you can just catch 4 more chocobos (any kind from anywhere) and send them to the stables, you don't need to bring them inside they can just be let go. When the parents are ready to breed again, you need to use another Carob and have them produce another child. Save before entering the farm for this, because you need to make sure and get a chocobo of the opposite gender to the first offspring and the other color (if you first produced a Green Male, you now need a Blue Female). When you get the right combination, again Sylkis and race.

By the time you get both the Blue and Green chocobos up to class A or S they should be ready to breed with each other. Using a Carob nut one last time, you should breed the Green and Blue chocobos to get a Black chocobo. If you've already caught and moved a Wonderful Chocobo into your stalls, make sure the Black chocobo is the correct gender to breed with it. Otherwise, it doesn't matter what the gender is, just go catch a Wonderful chocobo of the opposite gender. Then Sylkis and race both of these chocobos.

Once you have Black chocobo at class A or S, and a Wonderful of the opposite gender at class A or S, breed them with a Zeio nut. The end result should be a golden one (slightly darker than yellow chocobo).

You can Sylkis it too, even if it won't grow much as a result. It should be pretty easy to get to S class with it or even win in S class. But if you can't stand listening to the race music any more times, try going treasure hunting. A lot of cool materia caves await you.