Early level up
If you head back to Junon's upper part of town, you can fight some tough enemies that give tons of experience at this point in the game. Head toward the middle section of the upper part that is just a long hallway with the elevator mechanic you met previously and a dead-end at this point. At the bottom end, there is something on the wall that looks like a red button. Press it and an alarm goes off. Now, in this area there will be tough enemies, Death Machine and Slalom, that may be a bit difficult for the casual player. Death Machines are the ones to look out for, as they deal heavy damage; whereas the Slaloms like to try to poison everyone so have Star Pendants on and you'll be fine. Once you've had enough, exit into town and you can rest at an inn, buy items, etc. This can be repeated. Aqualung is almost a necessity to survive here.

Now that you have the Buggy and the Manipulate materia, you can start learning some good Enemy Skills. Start by getting Aqualung from the Harpy monster. Harpy can be found by driving around in the desert area around the Gold Saucer. Just manipulate Harpy and make it cast Aqualung on your party to learn it. Next, drive around the beach close to Gongaga until you run into the Beach Plugs to learn Big Guard. This is one of the most useful enemy skills in the game.

At this point, it's possible to drive back to Costa del Sol, take a ship back to Junon for 100 gil, and then find a green-and-white bird called Zemzelett from the Junon area. You can Manipulate it to learn the White Wind Enemy Skill, which is very useful. It's a long journey though, and it's not mandatory; still, the White Wind spell is really worth it. With that in mind, to reach the lower Junon area, use the freight elevator beside the save station in the hallway where you first trained for Rufus' parade.

Outside Junon (North East) there's a small cave that can be reached with the buggy. Here you're given the Mithril, a quest item necessary to obtain Aeris' seventh limit break. The number of battles you've fought needs to end in two odd digits (such as 133). See the Limit Breaks page for details.

If you do go back to get White Wind and Great Gospel, you can head back inside Mythril Mine to get Flame Thrower from the Arkdragon if you missed it the first time or if you need it for a second Enemy Skill materia.

Then, you can battle Midgar Zolom and learn Beta, if you're really daring. He's still a very tough monster at this stage in the game, but Beta is a great skill to have as it causes heavy fire damage to all opponents. Make sure you have Big Guard before going into this battle. You'll also want to give each party member Tranquilizers before hand and put your Enemy Skill user in the back row, equipped with Fire linked to Elemental.

Also don't forget on your way back to stop at Fort Condor and fight the Shinra for the second time to scoop up the Peace Ring if you win the battle which consists of 20 enemies. Please note that you cannot buy the Omnislash item from the Golden Saucer Battle Arena or Collect "Great Gospel" from the house in Gongaga Area until later on. (After Rocket Town).

To continue the game, head back to Gongaga, the big blown-up Mako reactor to the south, in middle of the woods.

East of Gongaga there's a lonely weaponsmith house where you can trade the Mithril for Aeris' Great Gospel manual. See the Limit Breaks page for details.

When you get to Gongaga, you hear Reno and Rude talking about the ladies. Elena shows up, alerts the others, and then you're fighting Reno and Rude. 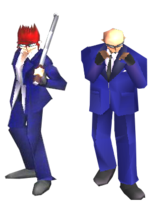 Individually, the two Turks are not much of a worry, because if you manage to kill one of them, the other will flee soon after. Just remember to heal at times, as some of the attacks like Turk Light are fairly nasty. Focus your attacks on Rude, since he has the ability to heal himself and Reno. Ramuh summon is pretty useful. Defeat Reno first and receive Fairy Tale or defeat Rude first and receive an X-Potion. If you do enough damage to kill them both at the same time you will receive both Fairy Tale and X-Potion.

After the fight, head left and pick up a Deathblow command materia in the middle of the path. This path will lead back out to the world, instead head right of the fork, and you'll enter the melancholic village of Gongaga. Speak to the varying people around town, especially at the graveyard, they refer to the terrible explosion that occurred many years ago. A parent person will trigger a reaction from Tifa and/or Aeris if they're in your party in reference to Zack, another SOLDIER. You'll encounter shops that sell items you will find very useful such as Time, Mystify and Fury ring. Go to the inn and you'll find a chest containing a X-Potion. In the Mayor's home in the far right corner, you can grab a White Megaphone for Cait Sith.

Head back down the path where you came in, and go right this time and you'll enter the ruined reactor. A helicopter will appear with Scarlet and Tseng in it. They will explore the reactor, looking for the Huge Materias and leave. After they leave, walk close to the area where Scarlet stood and you'll pick up Titan materia.

After you've stocked up, it's time to head down and left, to the world map and back on the buggy, and head west. Alas, before you do that, be sure to learn a new enemy skill in this area.