If you haven't used Aeris a lot, this would be a perfect time to put her in your party for a while, otherwise you're going to be in a world of hurt slightly later in the game when you have to have her aboard and she's a level twenty weakling. So let her stick around until she's around level 27-30.

After Cosmo Canyon, there's very few directions you can take, so head north until you come to yet another town. The town turns out to be a familiar enough sight - Nibelheim. You can go to various houses here and find out a few things:

If you want some experience and gold, it'd be a perfect time to do the Vincent subquest here - head to the Shinra Manor for that. If you go to the basement of Shinra manor, you'll find that Sephiroth himself, dramatically, decides to tell you a big clue and throws a complimentary Destruct materia at you before telling you to continue north. You could read the several papers scattered about the room. Head to the room in the right of the house and you'll get a Silver M-phone for Cait Sith. Be sure to pick up a Twin Viper for Yuffie in the northeastern room on the first floor. Before you leave, make sure to get the ????? Enemy skill from the jersey monster that can be found in the room with the safe. Best strategy is to just wait for him to cast since manipulate doesn't seem to work well.

The Nibel mountains path is not very twisty (it may appear twisty but it's still linear). You can climb the mountains to the right to grab a Rune Blade for Cloud (a nice four-slot double-growth blade), and Plus Barrette for Red XIII (a nice four-slot double-growth pin). To get the Plus Barrette, there's another ramp after the jump but right before the bridge, go up that way and then take the lower path. It's a really long path that winds up at the top with the chest holding the pin for Red XIII. The monsters in this area are harder than ever, so step up your game.

After the path, there's a rope bridge going up. Now you get to go through a fun little and complicated maze to find lots of items and various materia. After the rope bridge, you'll notice five chutes. Start by taking the chute that is second to the right, #2. Pick up the Powersoul (a weapon for Tifa) and then jump off to the lowest level. Steering clear of the monster, take the exit in the right corner of the screen. Jump down and go into the cave below. Be sure to steal a gold armlet from the Dragon if you encounter one. Go towards the top end of the tunnel, then cut back to reach the farthest cave on the left. Move through the hidden tunnel to get the chest containing an Elixir. Head back to the far end of the cave and go through it to get to the next room where there's a fountain. On the left side of the fountain, you can pick up an Elemental materia, then proceed into the next room. Loop to the end then come back to the left to get the Sniper CR, a weapon for Vincent. Go into the next room and take the lower left path to get to the where the reactor is. On the right side of the reactor is a door that will take you back to where you started (the room with the chutes). Climb the ladder to get back to the chutes. This time, take the second chute to the left, #4. This will take you to a chest containing the All materia. Hop down to the 3rd level, and go behind the boulders avoiding the Materia Keeper to get to the save point. Chute #1 will drop you in front of the Materia Keeper (a tricky proposition), whereas #3 and #5 will just drop you to the second level.

Too bad the only exit forward is blocked by a really nasty-looking monster.

This thing is probably a lot higher level than what you expected, but should be doable with sub-level 30 characters if you play your cards right. And like most boss fights, this gets a lot easier with Big Guard, so keep it up all the time! You'll probably learn the Trine Enemy Skill from this thing. Once you do, it works against the monster too. Under no circumstance should you use Ifrit or Fire, as these just heal the enemy. Also, don't use Vincent because his limit break turns him into a fire-breathing beast which you can't control. His fire-based attack will happily recharge the Materia Keeper again and again until you die. On the bright side, Bio is pretty effective. Odin's lance is effective, too. Also be aware that the enemy casts Cure2 on itself.

It's called a Materia Keeper, and the materia it kept is called Counter materia, so you should pick it up on your way out. You are rewarded with Jem Ring for winning this battle.

Some twisty passages later, you find yourself on the world map again, heading north. Here your options kind of run out again, so head to the big rocket sticking out in the middle of the plains.

Upon entering the town, you will find yourself in a courtyard. The first guy you meet says Sephiroth hasn't been seen here. Everyone's talking of someone called the Captain. To the immediate right is an inn (100 gil a night). The building on the immediate left is a weapon shop. You can buy a Shotgun for Vincent, some gold armlets, and accessories. The house in the upper left corner doesn't contain anything. Across the courtyard in the upper-left-middle is an Item shop where you can buy Barrier and Exit materia.

Outside of the Item shop, there's an old guy. Talk to him a couple of times and you'll find out that he wants to rest his aging eyes on that big rocket, and will give Cloud Yoshiyuki for his troubles.

There is a Power Source in the house on the right.

In the middle house there is a Drill Arm (weapon for Barret). You can walk through this house and find a nice-looking airplane called Tiny Bronco on the backyard of one of the houses. A woman called Shera will tell that the plane is in fact owned by this Captain guy, who, as the multitude of hints have pointed out by now, is in the Rocket. Head to the rocket.

The Captain, as it turns out, is a new character - Cid, who swears a lot. He tells you of the Shinra Space Program. And no, he won't give you the airplane. Head back to the house where Shera is. Cid wants you to have tea. Shera makes it, and tells why Cid swears so much, specifically, she tells of the sad state of the space program.

Then, Shinra executives arrive in the town. Palmer barges in Shera's house. You probably remember Palmer from the Shinra building, but luckily, he's too obsessed with lard to remember you right now. Head out, and you find out that no, Rufus hasn't shown up to restart the space program, just wants to grab Cid's airplane. Shera hints that Palmer is trying to steal the plane and it would be prudent to stop him. 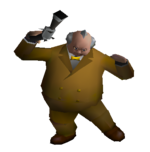 If Materia Keeper was frustrating, at least you now get to fight something a little bit less perplexing. Palmer's Mako Gun is a bit annoying - equivalent to nasty elemental spells - but nothing to worry about if you just remember to heal. Hammer away with spells.

Then, the airplane gets moving. Palmer ducks around, runs away, and gets flattened by a truck. You get rewarded with Edincoat for the mishap. The party hops aboard, the plane gets going, and you grab Cid aboard. Too bad Shinra troops manage to damage the plane and it crash-lands. At least you can use it now to cross some waterways - but you need to wait a lot longer until you get a real airship.