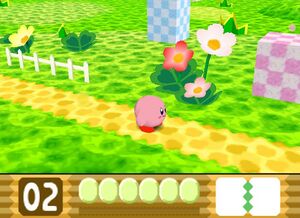 This is the shortest and easiest stage in the game. In the beginning there is a small yellow star all the way to the left of the stage.

Crystal Shard
The first shard is located before the mini-boss, in between two Sirkibbles. It's a very obvious find.

The 1st Shard
Crystal Shard
To acquire the second shard you must have any of the bomb abilities. If you do not yet have bomb, there is a Poppy Bros Jr. found within the area. The shard is located under a platform in the water just before the end of the course. Blow up the platform and the shard will be in the hole under the water.

In the middle of the stage, you reach a cabin with a maximum tomato in front to restore you back to full health before entering. 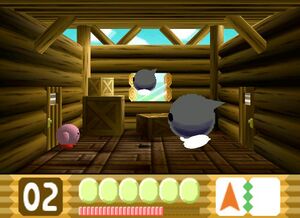 The mini-boss is a giant N-Z. Once you enter the cabin, the door shuts and regular sized N-Zs appear in front of you. These enemies do not attack, but if you touch them (without attacking) you will get hurt. If you did not acquire any abilities before entering the cabin, that's where the regular sized N-Zs come in handy. You just inhale the N-Z and spit it out at the mini-boss. Another one will spawn immediately. It shouldn't take too many hits. You do not receive a crystal when you have defeated the Mini-Boss.

Crystal Shard
When you have successfully done away with the Waddle Doo, the 3rd and final crystal for this stage will appear.

You will face a Waddle Doo at the end of the course. You should have some type of ability to defeat him with ease. Without a special ability, he will charge, and release a star when he hits the side of the arena. You can grab this star and shoot it as Waddle Doo to inflict damage.