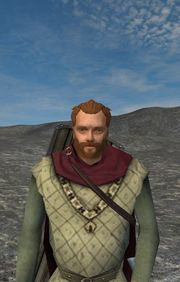 Prince Valdym was to be the heir of the Vaegirs. His father died at an early age, and the king's brother, Burelek, was to hold the throne as regent until Valdym came of age. Instead, he accused the king's wife of adultery, and claimed that Valdym was not his father's son at all. Burelek has now died and his son Yaroglek has succeeded him as king. Prince Valdym has come to accept his nickname "the Bastard", and uses it as a constant reminder of his mission.