A town icon as seen on the world map.

Whenever you enter a town you will be presented with a menu of various options: from this menu you can trade directly with merchants as well as assess trade prices (see Trade) or jump to various locations in the town. You can also choose to go to these places on foot. If you choose to 'Wait here for some time' it will cost you a certain amount of denars per night (depending on your army size). During this time you must still supply your troops with food (unless ownership of the town belongs to you) and there is no reduction in wages that are paid, but if you and/or any of your units are wounded, healing occurs faster. 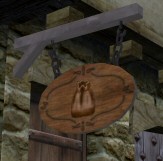 Unlike the goods and horse merchants, the arms and armor merchants can be accessed at any time of day—Mount&Blade employs an in-game time-of-day system (ex. Dawn, Morning, Noon, Dusk, Evening, Midnight, Late Night)—while walking around the town streets. However, whether by mistake or by design, one can still access all four merchants at any time of day via the text menu that is shown upon entering a town or when Tab is pressed (the default key for leaving a location).

The Goods merchant is located inside an actual shop, which is indicated by a sign depicting a bag of what is presumably money or perhaps one of the various goods that are traded in Calradia, such as spices, salt, and wheat grain, etc. This is as opposed to the other vendors which sell their merchandise from the streets, but interacting with the door leading to this "shop" merely brings you to the trading interface (i.e., the shop is not an actual enclosure that can be entered, unlike the Lord's Hall or Prison of a town or castle). (Note that in previous versions of the game, the goods merchant also sold horses, and a separate horse merchant did not exist.) 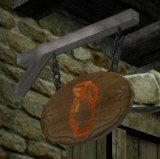 The tavern is the place to recruit men and hear a few tales. The patrons are random, so you may find one or more of the following:

Tavern patrons change almost every day, so check back every few days to see if anyone interesting has turned up.

The arena is a safe way of gaining combat experience and a bit of money (the tournament master explains the rewards system; see Arena for more details), and it's a good place to start learning how combat works. You may also participate in the tournaments that take place in random towns every few days. The Tournament Master will inform you of the towns in which tournaments are going to be held in the near future (if any) when asked.

You can rest in a town you own for free. Your men will draw food from the town during this time. Each town you own has a chest you can access for storing items (not horses).

Town prosperity relies on arriving caravans ONLY. Ensure that caravans going to your town reach it safely. Caravans that leave a town will only affect the prosperity of their destination towns, not their towns of origin.

You can place or modify a garrison by choosing the "Station a garrison" option. In this interface, you can also place enemies you have captured (including Lords) in the town prison, or conversely, remove them from the dungeon and place them in your party as captives. Companions can not be garrisoned. Garrisoned troops draw their food from the town and the surrounding lands and thus do not require you to supply them with food.

Men left in a town are paid only half wages as they are not on active duty, and their wages are automatically deducted (along with those of the men in your party) at the end of each week. (Note that these wages are not accounted for in the 'Weekly Wages' amount shown in the 'Party' screen; this quantity only shows the wages that you will pay to the active service units currently in your party.)

If you place your entire party in a town's garrison before the day you pay wages, you will end up giving all your men only half the wages they would normally earn for active service. A much less tedious alternative is to simply invest in building a Manor in a village (see improvements) if you own one and to rest there at the end of a pay week. Allowing one's troops to rest at the end of a week forestalls having to pay them full wages each week, which can become quite significant as the size of one's party increases.

Under certain conditions, a town that has just changed hands may declare that it is independent. Despite this the town will be granted to a vassal within a few days. You can still interact with the town normally during this time.

The "Manage this town" menu option lets you build several improvements to enhance your town's effectiveness. The cost and construction time will be decreased if you or your companions have points in Engineer.