Payne calls Dahlia to the stand. Go through some conversations (that indicates that Dahlia would be a tough witness). She claims that her "Feenie" didn't do anything. Dahlia will testify about what she saw.

Dahlia's Testimony: What I Witnessed[edit]

Dahlia's Testimony
- What I Witnessed -

At some point, Dahlia will tell you "You haven't change one bit". Have they met before?

Press on Dahlia's 3rd statement. She says she never saw Phoenix or Doug fight. When given the options, choose Show contradiction. You demand that Dahlia will tell us the truth. She will add two new statements.

3DS Trilogy Note: The second line is replaced with "It didn't look like they were fighting, and I didn't hear anything unusual either".

Dahlia has slipped up. Present Phoenix's Testimony on the latter statement. Dahlia's "Feenie" testified that he heard a sound when he pushed Doug, like a loud snap. Dahlia will cover her mistake saying she was wearing headphones at the time of the crime. She is afraid of the sound of thunder and lightning, so she was listening to her headphones, therefore, she didn't hear the spark. You then spot something in her testimony. When you are given a choice, choose There was lightning.

You try to change the case saying, that if there was lightning, then it is possible that Doug was struck by lightning. So does that mean it was all an accident and nobody killed Doug? Not exactly. Payne counters your theory by saying that there were no lightning strikes near the university, and to support the electrical wiring's involvement to the case, he presents a report from the students at Ivy University, saying that there was a blackout at the Pharmacology Dept. at 2:55pm, around the same time Doug was killed due to the severed cable! The cables were very old, so the smallest bump could cause them to snap. The Student's Testimony will be added to the Court Record.

The Judge is still pondering something, what did make Doug touch the cable? When given the chance, Present Phoenix Wright's Profile. According to the report, there was a power outage on 2:55pm and The autopsy report says Doug died at 3:00pm. If you look at the crime photo, Doug's umbrella is far from him near a far pole and if he landed on his umbrella when he fell, then Doug could have landed away from the severed cable, thus, someone other than Phoenix might have killed Doug!

Dahlia's Testimony
- What I Witnessed, Part 2 -

What I Witnessed, Part 2: Cross-Examination[edit]

Press the first statement to get the Beware, Your Honor! achievement or trophy if you are playing any of the Phoenix Wright: Ace Attorney Trilogy releases which support achievements or trophies.

Present either the Student’s Testimony or Crime Photo 2 on the 5th statement. Look at the wristwatch at the crime photo. Remember Doug's wristwatch? It stopped when Doug was electrocuted. The clock said 3:05! 10 minutes after the blackout! You now come to the conclusion of who killed Doug. When given the options, Present Dahlia Hawthorne's Profile. What was she doing on those on those 10 minutes between the blackout and the shock? Pushing Doug to his doom that's what!

Just then, Phoenix interrupts. He says his "Dollie" wouldn't do anything. Grossberg arrives, receiving the police report considering the death of your boyfriend. (Mia had a boyfriend?) Now you have ammo! The Police Report will be added to the Court Record.

Dahlia's Testimony: How I Met My Feenie[edit]

Dahlia's Testimony
- How I Met My Feenie -

Press on statement 2. What exactly is she doing in the courthouse? When given the chance, choose Keep Pressing. She will answer in a new statement.

Present the Police Report on that statement. According to the report, a crime occurred just eight months ago. A fellow attorney was poisoned and Dahlia was listed as a prime suspect! Dahlia will respond to your claim with her final testimony.

At statement 5, Present Doug Swallow's Profile. Doug is a Pharmacologist, thus he has special chemicals in his lab. Without such chemicals, Dahlia would never have acquired such poison. Dahlia will now remind you that the poison needed two teaspoons to be lethal, so how did she managed to contain the poison? In the article, they couldn't find the weapon, so it is probably still lost. You now need to present evidence of how she managed to hid it. Present either Dahlia's Present, or Phoenix Wright's Profile.

Both Dahlia and Phoenix met on the same day as the poisoning. Dahlia knew she had to hide the poison fast. She decides to give her necklace to Phoenix, who had nothing to do with the murder. Why? Look at the bottle. It looks like it could contain a small amount of liquid... such as 2 teaspoons of poison! Dahlia gave it to Phoenix disguised as a present.

Suddenly, Phoenix blurts out with an "Objection!" The reason he is doing this to protect Dahlia, is because he is madly in love with her. You now need to prove to Phoenix that Dahlia doesn't love him back and she was dating him for a reason. When given some choices tell Phoenix that it was because of that necklace. Remember what Phoenix said back in the defendant's lobby? Every time they dated, Dahlia would ask, "please give it back". Why? The necklace had poison in it, and it should be obvious that Dahlia would be called a criminal since she gave it to him, especially since Phoenix showed the "present" to everyone!

At this point, Phoenix knocks you unconscious and attempts to run out of the courtroom.

You came about, only to find that Phoenix took Dahlia's Present, which is removed from the Court Record. Eventually, Phoenix comes back to the stand. Where is the necklace? Phoenix will say he ate it. He what!? He says it was too big to swallow, so he chewed it into tiny bits. But that bottle could still have poison in it right!? Wrong! Phoenix still seems to be alive and well. Payne will argue that the bottle never contained any poison at all. He thinks that you are bringing out "lies" because you believe in Phoenix, just as he trust his own life to his witnesses.

It looks like your claims will be thrown in the gutter. But just then, Phoenix will reveal more of the conversation he had with Doug. Doug told Phoenix some poison was stolen and he thinks Dahlia could have done it. He rushed out of the crime scene, but has gotten worried and returned... only to see Dahlia crouching next to his body. He was told from her not to tell about this, but he does insist that Dahlia was innocent. You will now explain Dahlia's motive for stealing the poison. She took it to kill someone. When asked who, Present Phoenix Wright's Profile.

Dahlia knew that if Phoenix kept the poison for too long, it would mean trouble for her, so she had to take drastic measures, even when it means leading him to his fate!

Dahlia will now reveal her evil side for the first time. She wants proof from you that she planned on killing Phoenix. Phoenix ate the necklace, so you have to find other reasons. You only have one chance to present evidence or you will be stripped of your badge. Now for the final blow, when given the chance, Present Coldkiller X.

Phoenix told you that he lost his bottle on his "date" with Dahlia. It could probably mean that she stole it to put poison in it, knowing that Phoenix would soon take it. When Doug was warning Phoenix, Dahlia's plan would likely be ruined, so she realized to herself, "I can't allow Doug Swallow to live!" So she cut one of the cables and pushed Doug into the severed cable and stayed there, because Phoenix saw her before many others went to see the crime scene.

You offer the medicine to Dahlia, if Phoenix proved her innocence by eating the bottle, then why doesn't Dahlia do the same thing with the medicine? At this point, Dahlia will finally give up and confess to the crime, but she warns you that she will see you again.

Payne denies that the medicine is poisoned. You offer him to try it, since he would trust his own life to his clients. Payne responds by expressing such a scream, he loses all of his hair... literally.

Dahlia is arrested and leaves with a smile. The Judge ask you if how you and Dahlia knew each other. You say that it has nothing to do with this case. It looks like it isn't over... yet.

It is the day Dahlia Hawthorne and Phoenix Wright met. Dahlia used a poison to kill a fellow attorney (who is hinted to be Mia Fey's boyfriend.) Before the police arrived, Dahlia desperately tried to hide the poison on someone. She gave the necklace with the bottle containing the poison in it to Phoenix, who had nothing to do with the murder as a symbol of love. The plan worked, the murder weapon was never found, and Dahlia was acquitted with all charges. The case made it to the papers.

Phoenix fell in love with Dahlia instantly. They soon began dating. Dahlia had been asking Phoenix to give back the poison, knowing that if Phoenix kept it for too long, it would mean trouble for her, especially since he is showing it around to everyone. Phoenix would always refuse, forcing Dahlia to murder Phoenix. 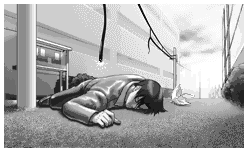 Eight months after the incident, Dahlia stole some poison from the lab of Doug Swallow, Dahlia's ex-boyfriend at Ivy University. During lunch that day, Dahlia stole Phoenix's medicine, Coldkiller X, and spiked the medicine with the poison, knowing that he would soon take it. Later that day, Doug called for Phoenix to meet near the Pharmacology Dept. and tried to warn Phoenix about "that girl" and what she did. Angered by Doug's words, Phoenix shoved him, sending Doug flying towards an electrical pole, causing a brittle high-voltage cable to snap. The fall also broke Doug's umbrella. This happened at 2:55 pm. Then Phoenix left the scene.

Dahlia, after witnessing the two men's conversation, panicked and decided to silence Doug. A few minutes after Phoenix left, Dahlia approached Doug and pushed him into the severed electrical cable, killing him. As the Pharmacology students started to gather at the scene to investigate the blackout, Dahlia had no choice but to put the spiked medicine bottle she had been carrying into Doug's hand, just like what she did to Phoenix eight months prior. At that moment, Phoenix returned, finding Dahlia crouching next to Doug's dead body. Dahlia told Phoenix not to tell anyone about seeing her at the crime scene, and Phoenix agreed.

The police soon arrived to arrest Phoenix and Dahlia was taken in for questioning.

Phoenix seems distraught for Dahlia's guilt. (The truth hurts doesn't it?) Phoenix tells you that he will intensify his studies and will soon become a lawyer. He wants to help a friend of his and learn what a lawyer is. He would come to accomplish those in the first and second games, respectively.

We return to the present. Phoenix narrates that he is still haunted by the trial and about the death of the lawyer who saved him (Mia). Phoenix never thought those memories would soon rise again, but they will. But that is for later in the game.