You ask Iris to unlock all 5 real psyche-locks, but unfortunately, she says she can't. But how!? Edgeworth will take care of the investigation in the garden, while von Karma will help unlock the real psyche-locks and part ways with you. Talk to Iris:

You will see Pearl, along with Larry. It looks like they call the place the Loser's shack. You can understand Larry, but how is Pearl a loser? Talk to them:

Move to the Main Hall.

After telling Bikini the condition of the Inner temple and the new problem with the locks, you ask her why exactly did Misty come here suddenly. Bikini will say that Misty proved herself that she was the Master and told her that someone is trying to destroy the family line and she is determined to stop it.

What a twist! Let alone several! Could her twin sister remind you of someone you met before?

Move to the Courtyard. 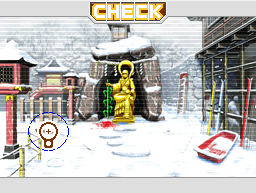 You will find Gumshoe, who is searching for the real murder weapon. He finds a letter, but thinks it isn't important. Talk to Gumshoe:

Check the Burnt Letter. It looks like instructions to channeling someone to earn the Master's position. The letter doesn't give any details, since they're all burnt out. Just who is channeling who?

Gumshoe will now tell you how the metal detector works. Just move the cursor until you find something, and press the Check gauge to look. You will now begin. Check the staff on the snow. It looks like something metal is inside it. After a few seconds of checking, you will find something stunning. There is a sword inside Elise's staff! Could this mean...

On the WiiWare version, the controls are pretty easy: Move with

when the Check gauge (all letters) flickers rapidly. It's pretty much like previous Ace Attorney games. The first game involves the DL-6 incident in finding "Gourdy" and detecting Manfred von Karma's hidden bullet. And the second one in the "Nickel Samurai" case involving teddy bears.

Gumshoe tries to go to forensics to get it analyzed for blood, but your concerns for Maya have you stop him. Gumshoe will give you the Victim's Staff, which will be updated to the Court Record.

Now, Move to the Garden.

You will see the same prideful Edgeworth investigating the garden. Talk to him:

Present ??????'s Profile to Edgeworth. After telling Edgeworth that Iris had a twin sister, you finally hear the sister's name, Dahlia Hawthorne. Talk to Edgeworth:

You finally have Dahlia Hawthorne's Profile opened. You know what to do, Move to the Training Hall.

You are now ready to take on Iris's Psyche-Locks. Do the usual, Present the Magatama:

Iris's Psyche-Locks: The Night of the Crime[edit]

Iris's Psyche-Locks: The Night of the Crime
3 Locks

Iris was indeed at her room at the temple, but someone claims to have seen her. Present Bikini's Profile. In her testimony yesterday, Bikini says she spoke with Iris last night about Maya's training, so it is no doubt that she was at the Inner Temple that night!

Iris will now say that she walked to the Inner Temple at 9:40PM. It takes about 20 minutes to go from the temple, to the Inner Temple. You know that's not possible. Present Iris's Testimony or Iris's Hood. She said that she was ringing the bells at 10:00PM, just like she was told to, and afterwards, you met Iris, who gave you her hood! Iris doesn't look like she remembered all of that.

You have now proven that Iris was at two places at the same time. Your explanation, say to Iris that there were two of you. Iris wants proof, Present Dahlia Hawthorne's Profile. Iris will remind you that her twin sister is dead. But you know that death doesn't stop her from being at the Kurain Training Grounds. It seems that someone has channeled Dahlia that night!

You ask Iris about a certain college student Dahlia tried to kill. (You, obviously) Iris says that her sister told her that she "hated his guts". Franziska whips you to continue your investigation.

You only have one more set of Psyche-Locks to break, Pearl's.

Move to the Heavenly Hall.

Just do the usual, (Present the Magatama) and you will begin the last Psyche-Lock challenge of the game:

Pearl's Psyche-Locks: The Night of the Crime[edit]

Pearl's Psyche-Locks: The Night of the Crime
5 Locks 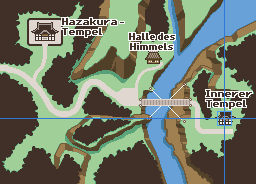 Pearl will admit that she was somewhere else when she was supposed to be with Elise. (Misty) It was because she was worried. You will check the map, Present the Inner Temple. After the murder happened, you found Pearl at the Inner Temple since the bridge collapsed around the same time. Pearl will like to know what or who she was worried about, Present Maya Fey's Profile. When Bikini's comments about the possibility of death from the training, Pearl couldn't help but worry for her cousin, so she had no choice.

Pearl will say she arrived at the Inner Temple after 10:00PM, so she heard the bell along the way. She was very worried when she heard it. Present the Burnt Letter. She was following the instructions of the letter. It looks like Pearl recognizes it.

Pearl was given the instructions to channel a certain person. When asked who, Present Dahlia Hawthorne's Profile.

You will now show to Pearl who wrote to her. Present Morgan Fey's Profile. It is quite obvious isn't it, as Pearl followed it even though she didn't know what it means.

Pearl sounds like you have her cornered, but she will remind you that she can't read well as a child. She wants you to show proof that she followed the instructions. Occasionally instructions were made for adults, so you have to prove to a child that she misunderstood some words. Present the Hanging Scroll. The instructions told Pearl to "gravely roast" the poster, but Pearl doesn't really know what the words "gravely" and "roast" mean. That is why Elise (Misty) "helped" Pearl "learn" what the words are. Pearl thought "gravely" meant "gravy" and "roast" was some sort of food. That is why she spilled gravy all over the poster, because she didn't read the words correctly!

Just then, Godot comes, again taunting you for not protecting Maya. Is Maya really dead? Maybe tomorrow in court, you will find the truth somehow.

This concludes the final investigation day of the game. You will now do the rest in court tomorrow.