You will take the role as Miles Edgeworth from his point of view. Miles is one of Phoenix's past friend and prosecutor from the last game. You wake from your sleep by a call from Larry, who frantically inaccurately tells you what happened. You decide to return to the country after hearing what happened to Phoenix. It has been one year since "Phoenix Wright Ace Attorney: Justice for All" that Miles has been out of the country. Luke Atmey should have already told you (Phoenix) about it back in "The Stolen Turnabout".

You run into Larry. You describe to Larry what is going on. You met Phoenix at the hospital. He is expected to recover within the next 2 days. There was a murder at the temple and one of the younger nuns is the suspect. Phoenix has given you the Magatama and his Attorney's Badge (yes, it's what you think) and everything he has collected.

Larry will ask you to defend Iris. But, you are a prosecutor! Larry says a paper badge fooled a court once (from Recipe for Turnabout) but it won't work again.

You talk to Iris. You tell her Phoenix will be fine. You have a slightest feeling you met her before. Talk to Iris:

You ask Iris how she knows Phoenix. She says that 5 years ago, she "deceived" him. She knew that Phoenix had suffered, so she thought he'd never see her again and has avoided him since, until now. You decide to defend Iris, if she tells the whole truth to him the next time they meet. She agrees and you decide to do what you dreamed to be as a child.

Move to the Suspension Bridge.

You will, of course, meet Gumshoe. He thought Godot was going to be here before him. Talk to Gumshoe:

Move to the Main Gate. Gumshoe will accompany you,

You run into Larry. Talk to him:

Present the Attorney's Badge here to complete the first of the 2 steps for getting the I Hate Childhood Friends achievement on the 2019 Steam Trilogy.

Move to the Main Hall.

You will meet Bikini here. After Gumshoe introduces you to her, you scold the detective for not telling you that "Bikini" is the nun's name! Talk to her:

Present Iris's Profile to Bikini. Bikini insists that she saw Iris at the Inner temple at 10:00PM. This doesn't fit with Iris's claim, as she never went to the temple. You don't see a Psyche-Lock, so what is going on!? The plot does indeed thicken...

Examine what looks like a piece of paper on the upper-left side of the floor under the cushion. It says:

"To Iris of Hazakura Temple:

There is something I must talk to you about. I'll be waiting for you tonight at 10 at Heavenly Hall. Make sure you come. Unless you want your "secret" to be exposed..."

Is this a blackmail letter!? The Note to Iris will be added to the Court Record.

Move to the Courtyard.

Here we are at the crime scene. Talk to Gumshoe:

Time to investigate the crime scene. Examine the Ami Fey Statue. Gumshoe confirms that it is indeed the murder weapon, and there are fingerprints all over it... Iris' fingerprints! The Shichishito will be added to the Court Record.

Note: If you remember the Ami Fey Statue and Shichishito, it's also spotted at Lord Tailor's basement back in the "Mask☆DeMasque" case.

Now Examine what looks like a staff in the snow. It looks like it was Elise's staff, as the fingerprints show. Note that the crystal on the staff is gone. The Victim's Staff will be added to the Court Record.

Move to the Detention Center accessible from the Suspension Bridge, where you will notice that Larry is gone.

Talk to Iris about the Inner Temple. Iris insists that she wasn't in the temple, despite what Bikini said.

You know what to do, Present the Magatama:

Iris's Psyche-Locks: I Was Frightened
2 Locks

Iris wants you to show what frightened her out of the Inner Temple without following orders into staying at the inner temple. Present the Note to Iris. She was scared of who wrote this.

Iris will now say that the letter was a prank, to reveal her secret to everyone. She would never hide anything from anyone... except for one person. Present Phoenix Wright's Profile. He holds a special place in her heart and of all of the people in the world, she couldn't tell anything about her deep dark secret to the man she has certain feelings about.

Frightened?: She was scared go to the Inner Temple, because the blackmailer could be hiding at Heavenly Hall, a small shack that is at the end of the small path from Dusky Bridge. Hazakura Temple Map will be updated in the Court Record.

Iris's Testimony will be added to the Court Record.

You and Detective Gumshoe hear a voice approaching and hide to listen to what's going on. It's just Larry, who seems to be blaming himself for something. Detective Gumshoe blows your cover and you meet Larry once again.

Examine the flags in the background to complete the second of the 2 steps for getting the I Hate Childhood Friends achievement on the 2019 Steam Trilogy.

Time to break some "Psycholocks". Present the Magatama:

Larry's Psyche-Locks: The Night of the Crime[edit]

Larry's Psyche-Locks: The Night of the Crime
3 Locks 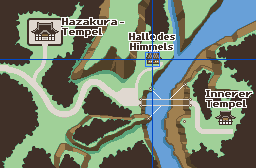 Larry will now like you to show where he was. You examine the Hazakura Temple Map. Present the Heavenly Hall, located just above Dusky Bridge. Recently, Larry told you he had just discovered it after sunset.

Larry will inadvertently tell you that she was waiting for someone. It's quite obvious who. Present Iris's Profile. Larry wants proof. Present the Note to Iris. He knew about Iris's frailness. If he was the one writing the "blackmail" letter, he could have written "Dear Iris" instead of "Salutations here".

You don't have the patience to break them all now. You decide to break him by throwing him at the witness stand tomorrow. Let's hope the court can break Larry apart and force him to tell the truth tomorrow.