Fawles will tell you about the crime 5 years ago.

It all took place on the same bridge, that looked broken as it is now. He kidnapped the 14-year-old girl named Dahlia Hawthorne, Valerie's little sister! Valerie tried to shoot Fawles to protect her little sister. Fawles thinks it is all a betrayal as the kidnapping was actually all acted out by Dahlia and Fawles!... and Valerie was in on it!

The Hawthorne family was very rich, and they both wanted a jewel worth $2,000,000. Fawles couldn't resist doing anything Dahlia says. He "kidnapped" her for ransom and send a note to her father to give up the money. Valerie went to the bridge with the jewel... and started shooting, for real. Fawles was shot in the arm and Dahlia fell in the lake!

Police eventually arrived to the scene and arrested Fawles and Valerie framed him from the murder. Fawles is now given a death sentence, Fawles wanted to know why Valerie would betray and lie to him. The eagerness to ask grew and grew until Fawles reached breaking point, which is why he broke out of prison.

Diego asks about the jewel. Fawles says that it went missing when Dahlia jumped into the Eagle River. Could Dahlia probably have stolen it?

The Diamond will be added to the Court Record.

Melissa has recovered from her unconsciousness. Now your mission here is to prove her motive for murdering Valerie. Diego convinces you that you have to smile no matter how dark things get. (So that's who gave Mia her confidence) Just look at Melissa. This also explains in previous Ace Attorney games, where that phrase come from when Mia talks to Phoenix (in spirit) during his career.

Time for a new testimony.

Press on the fourth statement. Melissa reminds you that Valerie did get him sentenced for what he did, and that Fawles pleads innocent because he is forgetful. Press harder Melissa will be thankful that she wasn't wearing a scarf, or else Fawles would have killed her. Have it added to the testimony.

Present the Scarf on that statement. Look at the photo. The scarf does belong to Valerie, as the witness said, but the one you found doesn't look white. Edgeworth wants to know why Melissa mistook it for white, Present the Victim's Note. Melissa probably knew what the note said, so she presumed that it was white!

So how did Melissa knew about the note, no one has ever seen it. There are a limited number of people that know about the note at the time. Fawles, Valerie, and another person. When asked who that person was, Present not Melissa Foster, but Dahlia Hawthorne's Profile! It says something about Dahlia to tell the truth, but isn't Dahlia dead? Well her body was never discovered right? And if she were still alive, she would be 19. About the same age as Melissa! So who is on the witness stand right now? Well, Dahlia Hawthorne of course!

Why would Dahlia hide her identity for 5 years? And how did Fawles and Valerie knew that she was still alive? Edgeworth now accuses you for trying to put an innocent witness into custody as a desperate attempt to acquit your client. Diego requests that you prove Dahlia's motive for murdering Valerie. Present the Victim's Note once more. Valerie had threaten Dahlia that she would reveal their secret to Fawles. Dahlia didn't like it one bit, so she had to do one thing, to keep Valerie's mouth shut permanently!

You request for one more testimony to find the truth once and for all!

Present the Dusky Bridge Map on the fourth statement. If Dahlia was pushed from the bridge according to the map, she would have landed in the bedrock, a certain death! Edgeworth will now say Fawles pushed Dahlia unwittingly into the river after being shot. Counter this theory by Presenting the Witness's Photo. The ropes are too high for an average person to push someone in. Even if the ropes were weak enough, Fawles could not have pushed Dahlia in because he was shot in the right arm, weakening him. So it could be that Dahlia jumped in the river herself!

You are now given a chance to explain why Dahlia would jump off, Present the Diamond. Fawles kidnapped Dahlia for ransom to get the diamond, when in truth, Dahlia wanted the $2,000,000 jewel to keep for herself. So she betrayed Fawles by taking the jewel inside her backpack and jumping off the river!

After you explain Dahlia's motive, she will reveal her evil side and will ask you one thing: the diamond. Where is it now? You don't have the evidence to show where the diamond is! Diego will not stand down. If evidence isn't the answer, then why not testimony? You are given one chance to call up someone that will shed light on the situation. This person is the only one who knows more about the kidnapping. When given the chance, Present Terry Fawles's Profile. Edgeworth will call him up.

Fawles looks traumatized for what he just heard. He is asked to testify of who he saw on the bridge. Valerie or Dahlia? Dahlia will tell him that her life is now in his hands.

Fawles continues to protect Dahlia, despite the fact that he knows what she did?

Present the Witness's Photo on statements two, three, four, or five. It clearly shows that the woman was there at the crime scene first. Terry was there after she arrived.

Now you have the upper hand! Just a little more and you'll win! However, Fawles will reveal to you that both he and Dahlia made a promise. (Note Fawles's bleeding mouth.) If they ever lost faith each other, they would drink a vial they buried under a tree. Fawles feels like he broke that promise and says his final words before finally falling on the stand.

If you did notice the vial, it looks like "Dahlia's Present" (the necklace) from the first case when you're introduced to Dahlia.

This took a severe blow to both you and Edgeworth. The trial ends suddenly and tragically, and the demon called Dahlia Hawthorne leaves with a smile on her face.

Tremendously angered by the fact that his coffee unwittingly led to Fawles poisoning himself, Diego crushes his coffee cup to pieces with his bare hands, sustaining severe cuts in the process.

It all started with a promise made between Terry Fawles and Dahlia Hawthorne five years ago. They promised each other they would love each other forever. They buried a small vial under a tree. They vowed if they had lost faith of each other, one would drink the poison and die.

One day, Dahlia made a plan against her family. She convinced Terry to work with her on her scheme. Her father was a jeweler and Dahlia was willing to take a diamond worth $2,000,000. They planned to fake a kidnapping and convince Dahlia's father to give up the diamond. They would then sell it for money and split it to the three. The third one in the act was Dahlia's sister Valerie Hawthorne to be the giver, since she had just became a police sergeant. They chose Dusky Bridge located above Eagle River as their location of the ransom. 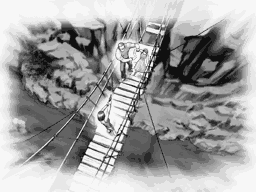 Everything went as planned up until Valerie came. She did something that both she and Dahlia had secretly planned to betray Fawles and put him out of the picture. Valerie pulled out a gun and shot Fawles in the arm. Dahlia grabbed the diamond and put it in her backpack. She then did the unplanned, she jumped off the bridge and washed away. Dahlia actually wanted the money all to herself.

Dahlia somehow survived. She changed her name into Melissa Foster and went into hiding. Only Valerie knew that she lived.

Fawles was later arrested and was put on trial. Valerie testified that he had pushed Dahlia off the bridge. Fawles was convicted for murder and was sentenced to death.

Five years later, Fawles escaped prison during a transfer (the vehicle crashed), he proceeded to call Valerie to get her to say why they betrayed him. He requested that she wear a white muffler to recognize her, because he couldn't remember her face. Valerie wrote down Fawles's request on a piece of paper at her desk. She then went to inform her sister that she would be telling everything to Fawles and the whole world. Dahlia wouldn't allow her to do so and planned to kill Valerie to keep her mouth shut.

Valerie arrived at Dusky bridge, and Dahlia followed. Dahlia stabbed Valerie in the back presumably because Valerie insisted on telling Fawles. Fawles himself finally arrived with a stolen car and ran off to get the vial he vowed to use first. Dahlia took this as an advantage and set up her camera at the cliff and with a timer. She then put the body inside the truck and put on the white scarf.

Fawles came back and, thanks to the scarf, mistook Dahlia for her sister. After talking for a few minutes, Fawles took the stolen car and left, unaware that the real Valerie's body was inside the trunk of the car. The police stop him from going any further and arrested him for another crime he didn't commit.

If Fawles had let go of his love for Dahlia and his vow, he might have gotten a Not Guilty verdict, get Dahlia convicted and ultimately, avoided death.

You blame yourself for Fawles' suicide, but Diego stops you. He calls you by your real name and crushes his cup with his bare hand, leaving it bleeding. He tells you that "The only time a lawyer can cry is when it's all over."

We then return to the present. Phoenix narrates that he had nearly forgotten everything about Dahlia. He recalls that he was involved in "that case," where Dahlia was convicted anyways.