Gumshoe will bring you the small bottle you found at Trés Bien a few days ago. It turns out to be that medication Glen was using! As for the fingerprints, Gumshoe has nothing. The Small Bottle will be back to the Court Record.

Godot calls Jean Armstrong as a witness. Let's get this over with, so he can leave the witness stand.

There was a mirror at the time of the crime!?

If you are going for the "Le français" de Jean HD iOS achievement, press every statement.

Present Glen Elg's Profile at the 5th statement. Remember what Kudo said yesterday. He said that Both the HMD and the earpiece are on the left side of his face, so if there was a mirror, Glen could have been wearing them on the right side. Godot will remind you that Victor's testimony was "just" a rash. So what you just said was quite random.

Armstrong will now testify about the mirror he mentioned a few minutes ago. 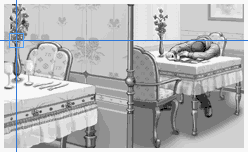 If you are going for the "Le français" de Jean HD iOS achievement, press every statement.

Present the Crime Photo on the 3rd statement. There is something that contradicts with this testimony in this photo. When asked what, Present the Vase on the table left of the frame. Then, Present Victor's Testimony. (You can also Present Victor's Testimony first then presenting the Crime Photo.) He said he knocked over the vase on the table he was sitting, so if he did see the crime with the mirror, the vase would have been knocked over! So there was no mirror at Trés Bien after all!

Godot now wants you to solve the contradiction you just discovered. When given the choice, choose The victim was a phony. If Victor did insist of what he saw, then the "crime" he would have seen was a fake. This probably means that the victim from Victor's POV was also a forgery. The phony probably acted out the scene to create a "witness", and if that witness really did see the earpiece on his left ear, then the phony might have put it there by mistake, as for the waitress, she could also be a fake!

Armstrong will now explain your theory with another testimony.

Armstrong's Testimony: In the Restaurant[edit]

Armstrong's Testimony
- In the Restaurant -

So there was no mirror after all. 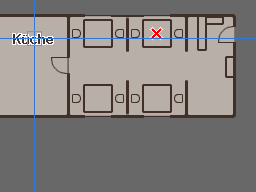 If you are going for the "Le français" de Jean HD iOS achievement, press every statement. On statement 2, Press Ask; How many minutes after? when pressing this statement because you need to get every last drop of testimony from this witness, and will need to do this before asking What time was it? because asking that question will replace statement 2.

Press on statement 2. That old man was of course Victor. You are given a choice of questions. Ask, What time was it? He will answer and revise his 2nd statement.

Present the Millionaire Radio Flyer at statements 2, 4, 5 or 6. The show was announced at 1:30PM each week. The show only takes 10 minutes. If Glen really did visit Trés Bien after 2:00PM, he might not have screamed in victory by that time! So the "Glen Elg" that was mentioned before, arrived some time AFTER the murder! So, with these errors, then this "victim" must be a phony!

Godot will now ask you where the real Glen was, or rather, his corpse! Uh oh! You might have overlooked this fact! It looks like you'll have to guess. Answer Inside Trés Bien, when asked where, Present the Kitchen on the floor plans. Godot asks for proof. Present the Small Bottle. You found this bottle in the kitchen. Armstrong denies ever seeing it. You show to the Court that it was the medication Glen used. Armstrong probably dragged the body to the kitchen, where the bottle may have fell out!

Note: After you present the Small Bottle as evidence, it should trigger the "Le français" de Jean Achievement assuming you've been following this guide.

At this point, Godot will let out a scream. It looks like Armstrong was lying after all. Godot and The Judge have Armstrong confess in his last testimony.

Armstrong will finally say that there was indeed another man sitting with the real Glen!

If you are going for the "Le français" de Jean' HD iOS achievement, press every statement if you didn't before, as this is your last chance to do so.

Armstrong will now confess that he was following Tigre's orders in order to keep his restaurant. He was forced to put Glen's body and the unconscious Maggey in the kitchen.

The Judge will call in Tigre himself to the stand. He calls for a thirty-minute recess under Godot's permission.