All protoss units have shields which prevents them from taking HP damage until the unit has no more shields. In multiplayer SCVs can repair any protoss vehicles and medivacs can heal any biological protoss.

The Protoss worker; able to gather resources and warp in buildings.

The Protoss create their structures in a different way to that of the other races, for the sole reason that the Probe can 'warp in' multiple buildings simultaneously. This allows for a Protoss base to be constructed or repaired very quickly with a small number of workers. A Probe does not need to stay with a building under construction. However, this means that Protoss must be very careful of raids, as multiple half-built structures are an easy target, and may cost a lot to replace.

Like all other workers, the Probe is fragile and unable to deal with the vast majority of enemies.

The traditional Protoss melee warrior. Strong against Marauders, zerglings and immortals but bad against hellions, banelings, roaches and colossus.

Can create guardian shield, forefields and can produce hallucinations. Also a ranged unit but very fragile.

Strong against any unit that is armored and can attack any air and ground units. Can teleport when upgraded.

Powerful cape wearing Psionic Master that is meant to support units. Its slow moving however and cost 50 minerals and 150 gas.

powerful against groups or small swarms of enemies. Does up to 80 damage.

Drains all energy from units like Thors, Ghosts and Battlecruisers. The more energy they lose means the more damage they take.

Two High Templar, or one High Templar and one Dark Templar can combine to form an Archon.

Strong against Marines, Infesters and sentries but bad against ghosts, roaches and colossus. 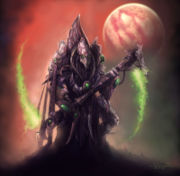 Elite Troopers that are Stealth, wore dark capes and armed with warp Blades for ground foes.

Can merge with another high or dark templar to form Archons.

Also there are two models of the Dark Templar, the one that wore zerg bones as armor and the other has a cloth covering its face.

Vulnerable to anything that detects cloaked units. 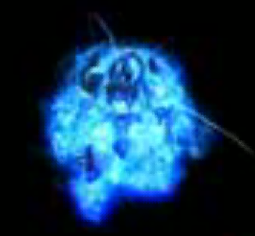 Powerful attacker that does bonus damage to biological units. Requires two high or dark or one dark and high templar to create. Not effective against heavy units or mechanical units like most terran and protoss units though.

Immortals are produced from the Robotics facility.

They can only attack ground units. Their powerful shields protect them against enemy units with heavy attacks making them effective against Siege tanks, roaches and stalkers but they are easily counterable by units such as Marines, Zerglings or zealots.

The shields reduce all heavy damage to 10 while it has shields.

A long legged mechanical unit, the Colossus is able to walk up and down cliffs. Each Colossus has its own pair of long ranged lasers. These lasers burn enemies over time and are good against weaker enemies and for sweeping a battlefield. They have a weakness against flying enemies and their size makes them vulnerable to Missile Turrets. Their size is massive which means they fill 8 slots in a Phase Prism.

Stealth spy and detector. Can be upgraded to move faster.

Phase Prisms are basically mobile Pylons. They are able to deploy and become stationary like a Pylon, providing an energy source to buildings, and able to be moved again when a player decides to remove the energy source. These units are advantageous for battles where photon cannons play a large role in a player's success. They also come in handy when repairing a town that has had its pylons destroyed, but need the energy to protect the town and energize the buildings. The energy emitted by a Phase Prism can also be used for warping in fellow Protoss units.

A new unit for air-to-air combat. It has a short ranged, quick-firing energy weapon that is weak against ground. It replaced the Scout and Corsair. It can devastate light air units but it wont last long against massive units like the Battlecruiser. It can hit and move at the same time besides the void rays and the mothership.

The scout is still used by the protoss. It is still armed with the same anti ground weapons and the powerful anti air missiles.

An aerial unit with an advantage against heavily armored units and structures. The longer a Void ray attacks a target, the more damage the target will take. They can target all units, but are weak against small units because they waste time powering up the damage against a single, small enemy; by the time one is killed, the Void Ray will be seriously damaged. Can be upgraded to move faster. Can fire while moving like Diamondbacks. They are good against Armored targets but they are not good against Mutalisks, Vikings and the fast moving fire while moving Phoenixes.

Can Auto build interceptors. Takes 160 seconds to warp in however. Can be upgraded to launch interceptors at a faster rate. These vessels are good against anything that is not a Viking, corruptor or void ray. 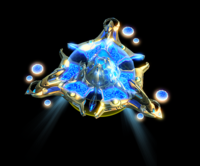 The Mothership is the single most powerful unit in the protoss army.

The Mothership is the ultimate Protoss capital ship. A player is only allowed to control one at a time and they cost a significant amount of resources to summon and 160 seconds to warp in. They are constructed at the Nexus, and require a Fleet Beacon and the lack of any other Mothership owned by the player before it can be produced. As such, it is a very late game unit.

The Mothership's standard attack consists of multiple disruptor pulses, that spread out and attack all enemies within range. These can attack both air and ground units. This makes them quite ideal as support in the back lines of a battle, dishing out pain to the front lines. While the Mothership has an immense amount of a hit points, they are incredibly expensive, and are not worth the risk of being exposed to open fire. Indeed, expect the enemy to throw everything they have in destroying these immense vessels.

The true power of the Mothership comes from its three special abilities. Each one has the capacity to turn defeat to victory. It passively cloaks all nearby friendly units (though not itself or other player's Motherships). It also has two activated abilites, both costing 100 energy. One of them can make any units in a certain area disappear for 20 seconds, while the other teleports a group of friendly units to it.

Zeratuls personal starship. Unplayable outside of a Custom-made map.