From StrategyWiki, the video game walkthrough and strategy guide wiki
(Redirected from Ultima 2)
Jump to navigation Jump to search

Ultima II: The Revenge of the Enchantress | Table of Contents | Gameplay | Walkthrough 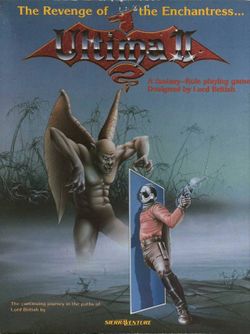 Ultima II: The Revenge of the Enchantress, developed for the Apple II computer and published by Sierra Online on August 24, 1982, is the second computer role-playing game in the Ultima series. It was also the only official Ultima game published by Sierra On-Line. Controversy with Sierra over royalties for the MS-DOS port of this game led the series creator Richard Garriott to start his own company, Origin Systems. The game was inspired by and drew elements from the 1981 movie Time Bandits by director Terry Gilliam.

The gameplay is similar to the previous game in the series, Ultima 1. However, the scope of this game is much broader in that there are several more areas to explore, despite exactly 50% of them being optional and therefore not needed to complete the game. This includes all of the dungeons and towers as well as most of the solar system planets.

From the game's introduction:

You start your quest lost and alone with only your wits to defend and guide you. Don't despair! Before long, you'll have people standing in line to meet you!!!

Pick up some useful tips in a local bar.

Hobnobbing with royalty is expensive, but you'll receive something you need.

You'll travel the high seas in search of adventure, but watch out for those pesky sea serpents!!

Dungeons and towers are dark and scary places, but the treasures they hold must be obtained to get[1] further on your mission!!

In time you will leave earth and travel[2] to other planets in our solar system. Be sure to pack for a night away from home.

When you return you must be prepared to face the ultimate challenge, to destroy the evil enchantress who has enslaved the entire universe: Minax!!

From the game's manual, we learn that the lover of the dark wizard Mondain, the enchantress Minax, is threatening Earth through disturbances in the space-time continuum. The player must guide the hero through time and space (quite literally) in order to thwart her evil plot.

The young Minax survived her mentor's and lover's death at the hands of the Stranger (in Ultima I) and went into hiding. Several years later, the much older and experienced Minax was very powerful, more so than Mondain ever was. Minax desired vengeance for the death of her lover; to do so she made use of the time gates spawned by Mondain's defeat to travel to the Time of Legends, the place representing the origin of time. From there, she sent forth her evil minions to all the different time eras and also made use of her dark powers to disturb and influence men, men who ultimately ended up destroying each other in the far future, nearly wiping out humanity. When Minax's minions emerged from the Time of Legend into present-day Sosaria, Lord British called for a hero to crush Minax's evil plans. The Stranger once again answered British's call.

The game begins with the Stranger at the start of their quest, ready to improve their abilities and acquire the necessary equipment so as to defeat Minax. Minax's castle, Shadowguard, can only be reached through these newly-spawned time gates (which are similar to moongates in the later games). Even then, an enchanted ring is still required to pass through the force fields inside the castle. Having to battle hellspawn across time and space, the war against Minax's vile legions was long and arduous, but eventually the Stranger manages to hunt down the sorceress to the Time of Legends, pursue her as she teleports throughout the castle, and finally slay her with his Quicksword, Enilno, emerging triumphant and bringing an end to the days of darkness.

The Japanese-only version included in Ultima Trilogy (FM Towns) has two important changes to gameplay: (1) visiting dungeons is rendered necessary since one vital item is no longer dropped by defeated enemies in the overworld; (2) a greater usage and understanding of the time gates is necessary as traveling by ship is limited by the availability of another item. A fan-made patch for the Apple II version adds these changes to the game.

The attributes of the character are not supposed to be raised to their maximum. If the player tries to this, any attribute that rises above 99 gets automatically reset to zero. Because of this, most players feel that the game is affected by what is known as the "roll-over bug". A fan-made patch for the DOS version addresses this issue, but not only that, it also improves graphics and adds more functionalities, part of which were already available in the C64 port. It can be downloaded here: exodus.voyd.net.