Quest for the white stone[edit]

The location of the white stone is the most complex to learn about. Mitre of Skara Brae says it is missing from Dungeon Hythloth, and starts a dialogue thread: talk to the barkeep in Trinsic, then to Sloven of Cove, then to Isaac in Skara Brae. Result: you need to fly to reach its location atop the Serpent's Spine Mountains. In Buccaneer's Den, Sniflet says that a lighter-than-air-device is near the entrance of Dungeon Hythloth, but J.J. Scirlock reveals that the same dungeon can be accessed from a secret entrance in Castle Britannia. Damsel of Paws confirms the same information.

Before entering the Dungeon Hythloth, make sure you have plenty of the following spells:

Check the Magic page for details on the reagents and the Ultima IV: Quest of the Avatar/Britannia Yellow Pages directory for the most convenient apothecaries.

Also purchase ten/twenty magic gems (you can use the "View" spell, but it is better to save nightshade and mandrake for other spells). 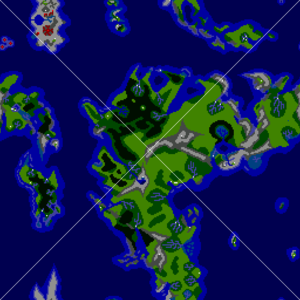 Map of Britannia centered on the White Stone location. Note that the shortest route there from Dungeon Hythloth is flying to the south-east.

Once you manage to get near the Serpent's Spine mountains (between Britain and Yew), locate the position of the White Stone shrine, align the balloon with it, then land on the hills near the mountains. Why? Because the wind is quite tricky; you should make sure you are aligned with the Stone, then cast the "Wind" spell in the required direction, then jump onto the balloon. When you are above the shrine, just Search it to grab the White Stone.

You saw how hard it is to fly with the balloon. Better leave it and rely on your feet from now on.