Ultima IV: Quest of the Avatar/Dungeons

A short thread in Cove (talk to Allen, then Blissful, then the Ankh) allows to learn all the requirements to complete the game. If you followed this walkthrough, you already accomplished two (8-parts Avatarhood and the Word of Passage), and the next two are the Key of Three Parts and the Pure Axiom. 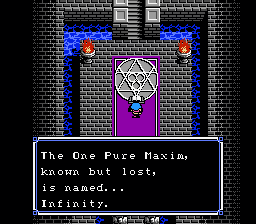 The ending of the NES remake reveals the One Pure Axiom, instead of asking for it.

Several clues are scattered through Britannia. First, Joshua and Juliet in Castle Britannia tell "the riddle" and give a hint to its answer. In Cove, four mages around a camp fire (Spellbind, Shaman, Charm, Circe) give more clues.

There is actually an unfinished thread towards the solution: talk to Dyka in Vesper, then to Francesca in Paws, and eventually to Smith, the talking horse in the same corral. It is a well known joke that the developers forgot to put the riddle answer in the game, so they put it in the next title.

Zajac of the Lycaeum starts a new quest: he directs the Stranger to Chuckles of Castle Britannia, who in turn says to talk to the Water that can be found in a secret room in the same stronghold. The elemental spirit starts revealing where and how to obtain the Key of Three Parts: there are three Altar Rooms that connect the several dungeons; in each altar room the appropriate colored stones should be used. The passage guards in Empath Abbey repeat part of that information.

Since the white stone of spirituality will be needed in all three altar rooms, it would be best to retrieve it first.

Thevel of Britain directs the Stranger to the beggar Roderick of Serpent's Hold. The latter reveals that magic orbs can raise the attributes. These items are found in the dungeons.

Enter the dungeons from their mainland entrance, go through the Altar Room and emerge from a different dungeon with oversea entrance. From there, either backtrack or use the Gate spell.