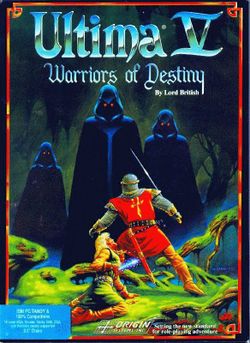 Ultima 5: Warriors of Destiny is a computer role-playing video game published in 1988 by Origin Systems for DOS, Apple II, and Commodore 64. Each year, additional ports were created. The last one was released in 1993 for the NES, but it was a simplified version (for this guide see Ultima V: Warriors of Destiny (NES)).

In the Atari ST port, if you leave a companion at an inn, the party's karma drops to the minimum (thus inflating all shop prices to the maximum). Since this makes no sense, it is possibly a bug.

The original MS-DOS version of Ultima 5 featured no sound. A fan-made upgrade adds music scores from the other versions of the game. It can be downloaded from exodus.voyd.net.