Jin Fu-Ha (不破刃) is a disciple who was betrayed by his sensei, Eiji Kisaragi. He has come to Glass Hill to test his skills against Ryo Sakazaki. 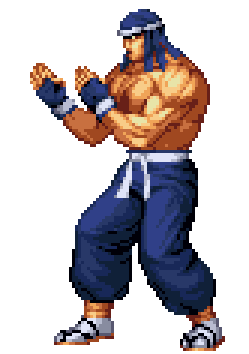 Jin was once a disciple of Eiji Kisaragi until Eiji betrayed him. Now Jin seeks to kill his former sensei Eiji. To test if he is strong enough to do so, he decides to see if he can defeat Eiji's sworn enemy Ryo Sakazaki and searches for him, eventually tracking him down and confronting him in Glass Hill Valley while Ryo is searching for his friend Robert Garcia there.

Unlike most of the characters, Jin's final battle in Art of Fighting 3 is not with Wyler, but Ryo Sakazaki. After Jin wins he suggests that Ryo was holding back and is dismissed by Ryo as a thug, and told that Ryo only wants to kill Eiji and has no interest in him. Unique to Jin Fu-Ha's ending is a page of text that tells the player Jin will one day fight Eiji but until then will wander the globe alone in the shadows.

So far he has only appeared in Art of Fighting 3.