Mickey Rogers (ミッキー・ロジャース) is a boxer whose career was destroyed when he accidentally killed an opponent in the ring. 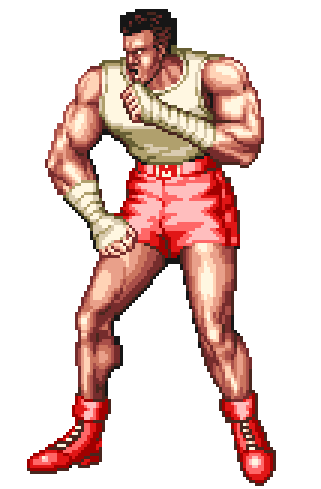 Mickey was a professional boxer, but was expelled from the ranks after he accidentally killed a man in the ring. He currently stalks Southtown seeking opponents to vent his anger and frustration on, and enters the tournament for the same reason.

Like John Crawley, Mickey gets a haircut between his two appearances. In the first Art of Fighting, Mickey has long hair, worn in dreadlocks. In Art of Fighting 2, he sports a flat-top haircut.

In AOF 1, Mickey is a small time hood who works for Mr. Big so that he can get money as a street hustler. In AOF 2, Mickey has since reformed, wanting to get back into the professional boxing circuit.

In Mickey's AOF2 ending, his trainer Pops (who is visible in Mickey's stage as well) informs him that his time has come, and he has a title bout. We then see Mickey training for the fight, confident that 'Mickey the Mauler' is going to be the next champion of the world.

In AOF2, Mickey is modeled after both Cassius "Muhammad Ali" Clay by appearance, and also Michael "Iron Mike" Tyson by likenesses. Both being real-world champion prize fighters.

His name is spelled Micky in the first AOF and Mickey in AOF2.

If you pick Mickey as your first opponent in Art of Fighting 2 (single player mode), you will fight the other contestants in the following order: