John Crawley (ジョン・クローリー) is a Martial Arts Instructor with a brutal and aggressive fighting style. He is known to his friends as "The Madman" and "The killing Machine". No one knows what his enemies call him, nor do they dare to ask. 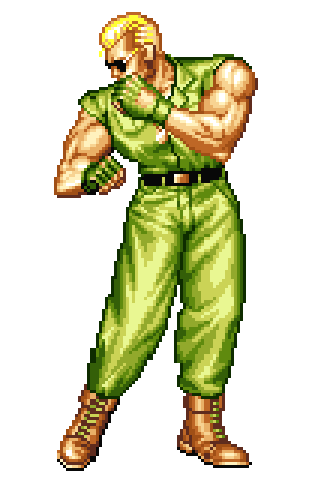 John was once a pilot of unparalleled skill, but then the marine took a air-to-air missile to his eye. Unable to fly, Crawley was driven to drinking and unsociable behavior. Years later, he was drummed out of the service after being implicated on gun running missions supplying the evil, Mr.Big. Insisting he was framed, the dejected, former ruler of skies now comes to Southtown to set history right.

John Crawley's AOF1 incarnation is based loosely on the bodybuilding action-star Arnold Schwarzenegger, his appearance in AOF2 later bares more of a resemblance to martial arts super-star Jean Claude van Damme. Both actors have played as macho militants in their films. He also has been compared to the Street Fighter II character Guile because of their similar color schemes, special moves, military motifs, and fighting stage.

In John's AOF2 ending, the US Military attempts to recruit him to rescue the President's canary, named Tweeter. John refuses, telling the General "Hasta la vista!"

If you pick John as your first opponent in Art of Fighting 2 (single player mode), you will fight the other contestants in the following order: