Mr. Big (マチュア) is the (canonwise) 'real' villain of the original Art of Fighting and the man responsible for the kidnapping of Ryo Sakazaki's sister Yuri. Although he works as the right-hand man for Southtowns kingpin of crime Geese Howard, he is constantly looking for ways to improve his position and dethrone him. 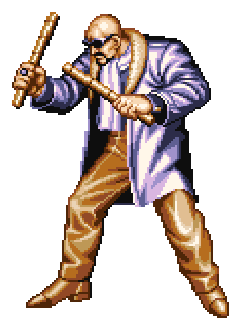 Mr. Big has been involved with the mob for as long as he can remember. He made it big in Southtown, a city as seedy and corrupt as he is. Rather than pay tribute to Geese Howard, boss of all organized crime in town, Mr. Big joined Geese's organization, and quickly rose to become his right-hand man.

While Geese was out of town on business, he left Big in charge. Big secretly feared Takuma Sakazaki, the master of Kyokugenryu Karate, so he ordered the kidnapping of Takuma's daughter, Yuri, and threatened Takuma into working for him. Unfortunately, the plan backfired when Ryo Sakazaki and Robert Garcia fought their way through Southtown's crime to find both of them, beating Big senseless to rescue Yuri and Takuma.

Big pondered informing Geese of the incident upon his return, but Geese soon grew embroiled in a situation involving the Bogard brothers, and Big wisely kept his mouth shut.

In Art of Fighting 1, Mr. Big could not crouch or jump.

You cannot pick Mr.Big as your first opponent in Art of Fighting 2 (single player mode). Mr.Big will always be the 12th and final match of a single player game unless you qualify for the 13. fight against Geese Howard. See the secrets section for more information.