Rody Birts (ロディ・バーツ) is a private investigator and partner of Lenny Creston, who has been hired by Wyler to find Freia Lawrence. 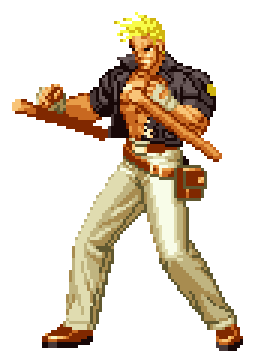 Rody Birts is a private investigator who works with Lenny Creston. Although Lenny totally dominates him, their relationship is good natured and there is even a hint of romantic tension. Despite this, they are partners in a business sense only. The two appear to have a rather poos professional reputation as a private eyes.

Rody has come to Glass Hill Valley, Mexico because he has been hired by Wyler to find an Freia Lawrence and deliver her to him.

Rody is pleasant, if not slightly yielding and possibly dim-witted character who fights with tonfas. He is sometimes presumed to be a police officer, or a former police officer (since he is dressed like one).

In his ending in Art of Fighting 3, Rody (like all the characters) leaves Friea behind to care for Wyler (as Wyler was his client and is now reduced to a child-like mind he could really do little else). This enrages his partner Lenny who saw finding Friea as her big chance, and she chases him off of the screen in anger.