Ryo Sakazaki (リョウ・サカザキ) is a practitioner of Kyokuganryu Karate and one of the main characters of the Art of Fighting and King of Fighters games. He is the son of Takuma Sakazaki, brother of Yuri Sakazaki and the best friend of Robert Garcia. 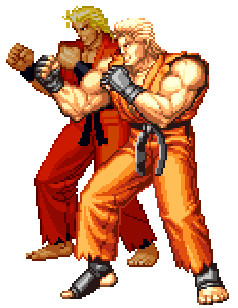 Ryo Sakazaki (リョウ・サカザキ, sometimes written as 坂崎 亮 or Sakazaki Ryō) is the main character in SNK's fighting game series Art of Fighting. His story begins in the first Art of Fighting in a traditional damsel in distress story. His sister Yuri is kidnapped by Mr. Big, a local criminal mastermind. With the help of best friend and rival Robert Garcia, Ryo manages to confront Mr. Big, leading him to a karate dojo where a mysterious man (originally unnamed in the game, but was named "Mr. Karate" by fans, and officially named as such in later games) challenges the two to a fight. When Ryo prevails, he threatens to kill Mr. Karate unless he can know that Yuri is alive. As Ryo prepares to kill him, Yuri appears, telling Ryo to stop, for Mr. Karate was their father.

The realization that Mr. Karate was indeed Takuma was not in the original Art of Fighting ending (except for the SNES port of the game, where it was clearly shown), but was merely speculation that was made official in the introduction to the second game, when Takuma was formally introduced. In the second game, Takuma reveals how he became Mr. Karate: when Geese Howard wanted Takuma to kill Jeff Bogard, adoptive father to Andy and Terry Bogard. Takuma refused, and in order to force Takuma to cooperate, Yuri was kidnapped. Takuma was forced to do things that were against his moral standards through repeated threats to kill Yuri, including fighting his two students. With the Sakazaki family reunited, the family, along with Robert, focused on exacting their revenge on Geese, and providing justice to all others who were wronged by him. Part of this preparation included, to Ryo's initial opposition, teaching Yuri the Kyokugen techniques.

Although their plan was successful to an extent, their victory was short-lived: Geese had managed to escape, and had ordered the killing of Jeff (but had killed Jeff by himself later). This ending effectively closed out the Art of Fighting series and brought forth the beginning of the Fatal Fury story, one that does not directly involve Ryo.

In the third game to the series, Art of Fighting 3, Ryo's role was largely insignificant, as he acts as a supporting character to Robert Garcia. However, one plot thread from that game that carried over into the King of Fighters series was the introduction of Kasumi Todoh, the daughter of Ryuhaku Todoh, whom Ryo fought and defeated in the first Art of Fighting.

If you pick Ryo as your first opponent in Art of Fighting 2 (single player mode), you will fight the other contestants in the following order: