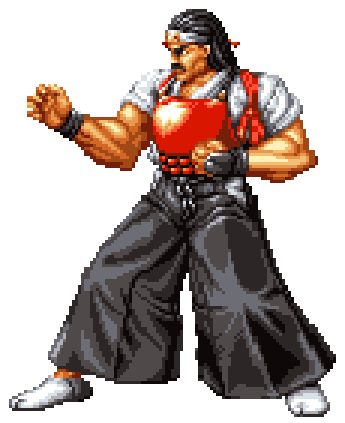 Ryuhaku Todoh is the creator and main teacher of Todoh style karate, which derives its style from Aikido and Kendo. Todoh had a long standing rivalry with disciples of the Kyokugenryu school of karate and considers them a threat to his style of teaching in terms of profits as well as personal animosity dating back to a rivalry with Takuma Sakazaki when both men were very young.

On his quest to find his younger sister Yuri, who had been abducted by Mr. Big under Geese Howard's orders, Ryo Sakazaki blatantly attacked Todoh at his school and fought him to interrogate him about the whereabouts of his sister. After Ryo easily defeated Todoh, he was humiliated and saw his schools finances as well as his attendance at his schools suffer. After the loss, Todoh went into hiding and hasn't been seen since. Because of his disappearance, his daughter Kasumi went on a personal quest to not only try to look for her father, but to gain revenge on Ryo and all Kyokugenryu disciples to try to reclaim her family's honor.

Ryuhaku Todoh only appears in the first Art of Fighting game and is simply referred to as Todo. He had only one single special move in that game.