Takuma Sakazaki (タクマ・サカザキ) is the most established known Kyokugenryu Karate practitioner and the father of Ryo Sakazaki as well as Yuri Sakazaki. His distinguishing feature is an X-shaped scar on his right pectoral. 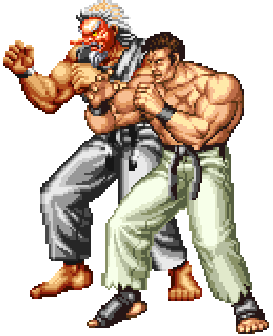 Takuma Sakazaki is an somewhat eccentric character. He is donning a tengu mask and insists he's Mr. Karate, and delivering speeches that are supposed to rally morale, but often make him look silly. Takuma is the most established known Kyokugenryu Karate practitioner, and he is the only one in the discipline who can make full use of the discipline's most difficult moves (namely the Shoran Kyaku), available only in the Shoran principle of Kyokugenryu Karate.

In the midst of Takuma's aim to spread the Kyokugenryu discipline, crime started infesting Southtown, and Geese Howard made himself the de facto boss of the city. Unwilling to live with it, Takuma fought his way through lackeys and stooges and confronted Geese himself, demanding that he put an end to the tyranny. Geese replied with threats against Takuma's children, knowing that they meant the world to him. Now with Takuma dancing at his fingertips, Geese forced him to work for him. In order to preserve his honor, Takuma donned a tengu mask and formed another persona: "Mr. Karate."

While Geese was out on business, Mr. Big was in charge. In order to keep Takuma firmly under his control, Mr. Big had Yuri kidnapped. Unfortunately, that move caused Ryo and Robert to tear up Southtown in search of her and Takuma. When Robert got to Mr. Big and defeated him, Big called for Mr. Karate, and he came out to battle Ryo by Robert's favor because he was already exhausted. Although Ryo won, he threatened to kill Mr. Karate if he didn't tell him where Takuma and Yuri were. Yuri stopped Ryo from killing their father, and they had a joyous reunion.

If you pick Takuma as your first opponent in Art of Fighting 2 (single player mode), you will fight the other contestants in the following order: