Lenny Creston (レニィ・クレストン) is a private investigator who, along with her partner Rody Birts, was hired by Wyler to look for Freia Lawrence. 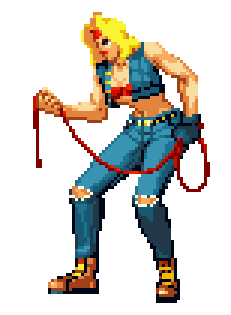 Lenny Creston (レニィ・クレストン) is a private investigator and she together works with her partner Rody Birts. Though there seems to be some romantic tension between them, the two are partners in a business sense only.

They have been hired by Wyler to find Freia Lawrence (an old schoolfriend of Robert Garcia) and deliver her to him. The two appear to have a bad reputation within their profession and Lenny sees their new assignment as their 'big chance'.

Lenny is a tough, straight-talking woman but with a caring nature underneath. She uses a whip to fight with and appears to be fond of using it for other uses, such as dragging her partner Rody around.

In her ending, Lenny is eventually persuaded by Freia to leave her to tend to Wyler, meeting up with her partner she simply lies to him about the current events, telling him that Freia was never at the village and they have another job now, dragging him off before he can protest.

Lenny has so far only appeared in Art of Fighting 3.