Geese Howard (ギース・ハワード) is the local crime boss of the fictional city of South Town and runs the company Geese Connections. He killed Jeff Bogard in front of his son Terry Bogard's eyes. 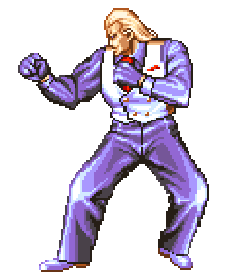 During the Art of Fighting series, Geese Howard gained power as a kingpin of crime. First, he made good on his threats against the Sakazakis, since Takuma stood in his way. Geese forced Takuma to cooperate at all costs or suffer the consequences. Takuma did not like the idea of serving Geese Howard so when he was ordered to kill Jeff Bogard, Takuma refused. Geese kidnapped Yuri Sakazaki and had Mr. Big supervise Takuma to prevent Takuma from disobeying Geese. Mr. Big then ordered Takuma to fight his own son, Ryo Sakazaki. Ryo's anger almost had Takuma killed, but Yuri came unscathed, told Ryo not to do so, and revealed that both Ryo and Takuma were tricked into fighting each other.

Takuma resigned from Geese's ranks and swore revenge against Geese for disgracing the honor of Kyokugenryu Karate. During Art of Fighting 2 (which is the first official instance of a King of Fighters tournament in AOF-FF timeline), the Sakazakis (and Robert Garcia) managed to defeat Geese. Geese then evaded the Haoushoukouken deathblow attempted by Ryo and later attacked and killed Jeff Bogard in unarmed combat, which was witnessed by his son Terry.

Though he is not a playable character in Art of Fighting 2, he is the secret boss character of this game. See the secrets section for information on how to fight against Geese.

Geese Howard is only a playable character in the SNES-version of AOF2, please refer to the secrets section for information on how to unlock him. He is also playable on regular MVS and AES neo-geo versions only if using Universal Bios 2.3 installed in the hardware's bios chip, otherwise there are no codes or techniques to unlock him. The moves are the same as for the SNES port.